My mother is an accomplished cook (A well documented fact in these chronicles). She came during the precious last weeks of my pregnancy and let her culinary talents flourish. Meals I prefer to classify as feasts were produced at the slightest drop of a hat. Then, I went into labour and had a baby. About the same time a terrible metamorphosis seems to have happened to her as well. There is a distinct degenerative trend in her cooking.  She spurns the occasional chilli, recoils from spices, and classifies half the vegetable kingdom as unfit for consumption. As if this weren’t enough, she upped the frequency of feeding me this cuisine. I only have to remain half awake to have some bland soup, or drink thrust at me with loving hands. The theory being that the extra nutrition is needed to feed the baby. She tells me of post partum mothers of the post Indian Independence era making ghee their best friend and drinking cups of it, while subtly deploring that I don’t accord it the same treatment. The general rule of thumb being that bland is the formula that is safest for mother and baby.

In spite of all this, there is the occasional discomfort that the newborn exhibits. Guess what this loving mother of mine does? After the immediate task of alleviating the discomfort of the infant, she then spends her considerable mental faculties evaluating and tabulating everything she fed yours truly in the past 24 hours. Then she proceeds to rank them by taste, and she boots the tastiest of the lot from the already shrinking list as the potential offender. Once, the tastiest thing I had eaten was an orange and they were on the potential list to be banned. They only survived because of my vehement opposition.

Why am I telling you all this? To prove that breast milk is one of the most thought about items on the post partum agenda. Grandmothers, mothers, aunts, great aunts are all full of tips on breast milk. So imagine my surprise when this rare commodity was featured in a news item alongside commercially sold icecreams?
http://www.npr.org/blogs/thetwo-way/2011/02/25/134056923/breast-milk-ice-cream-a-hit-at-london-store 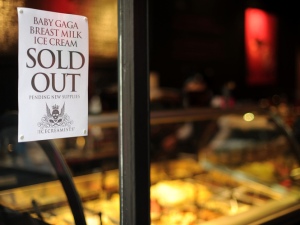 To be teased as the cow in the house is one thing; to make a career of it quite another.

To follow up on this news item, UK banned breast milk sundaes soon after.
http://allweirdnews.com/breast-milk-sundaes-not-allowed/

One thing still nags me : who is the target audience for this icecream? It can’t be the infants surely ….

8 thoughts on “Sundaes: Sorry – what flavor?”