Regular readers of my blog know I had a second baby this summer. They also know that it is the first summer I stayed home with the now-school-going-daughter. One afternoon as we sat on the bed reading while the baby slept nearby, I asked her how she felt about having a sibling. Her face lit up and she said in a rush “Finally I got a brother amma!” and proceeded to plant a rather wet kiss on his face, waking him up dutifully.

“Okay, so we just have to do this for another 7 years right? One baby every summer for the next seven years and we’ll be done.” I said putting my book down for the umpteenth time to soothe the baby. (I don’t know why I bother trying to read really.) She dropped her book and shrieked “WHAT?”

I laughed at her extreme reaction and thought of my lovely grandmother again. Her dimple, the gray hair that she pulled into a tight knot and the nine yard saree. “One yard for each child” she said as she hopped, skipped and jumped while tying her nine-yard saree. My simple brain asked her why she didn’t just switch to a six yard saree then and she gave me a vibrant laugh as an answer. 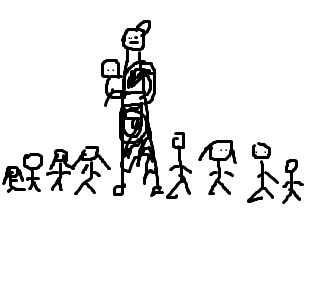 I have been thinking of her almost everyday since I had my little Tucky. I love babies, but I will also sigh at the amount of work (This… when I am lucky enough to have diapers, washing machines and help from parents) The poor lady had nine children one after the other, and the rigour of it all may have ruined her intestines, but did nothing to diminish her love for children. She still loved talking to us.

The only thing she ever asked of us was to massage her legs and I feel so guilty that I did not indulge her enough.

A friend had posted this link on the effect having children has on us and I couldn’t agree more.
http://www.codinghorror.com/blog/2011/10/on-parenthood.html

As we celebrate the 7 billion mark on 31st Oct along with Halloween, let’s hope Mother Earth remains bountiful and as accommodating to her most demanding species.

PS: I really need to get my diagrams-act together. Any pointers appreciated.

When some things are repeated often enough, we have the capacity to believe them. I could genuinely believe that I was being the sacrificial tree while giving up my eyesight because my husband was blind or I could finally tell my version of events.

Here goes: I did not really proclaim that I would forever lose it. What I did was have a row with him one evening. We were sitting in the orchard and trying to fall in love (with each other of course) when we heard an unusual sound – probably a peacock. Now everytime we hear a sound, Big D has a way of asking me what it is, and how very lucky I am to be able to see everything. Now really! It is hard to fall in love if one half keeps whining about how unfair it is to him that he can’t see a rainbow. I can’t see a rainbow either. I mean rainbows are elusive and subtle. To hear him describe it though, one would think it occurs every evening and looks like this. (Image courtesy Google search) 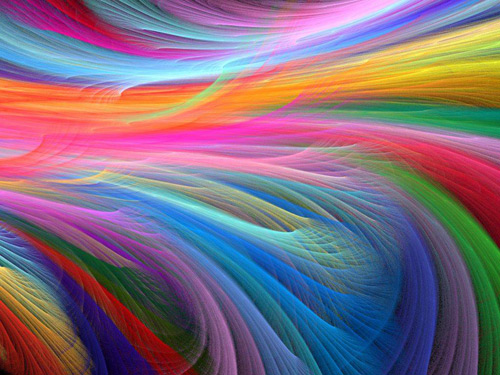 It isn’t true…I tried to tell him, but he decided to turn a deaf ear. Also, every evening talking about rainbows was a bit much. So when he took off about the bird and connected it to rainbows, I lost it. I screamed and spat and said I was going to tie my eyes too, just so I could talk to him without having to assume there would be rainbows in the sky every evening.

I always knew Big D was cunning, but what he did next had me stumped. When my mother-in-law, Ambika, came up, he put on his most demure face and said that I was going to give up my eyesight so I can feel the way my dear husband does. If I looked surprised – who could blame me? Before I could explain, the vile woman summoned the royal guards and loudly proclaimed she is blessed to have a daughter-in-law like me and now she could rest in peace knowing her son was in good hands. Next thing I knew, she was making a court announcement of my deed.

Every time people came and congratulated me on my large heart, I seethed. If it is hard for the townspeople to ignore what others think of them, you can imagine how much harder it is for royalty.

Incidentally, Ambika lived a good many years afterward, and had a way of describing what she saw when we walked together in the palace gardens. In hindsight I saw Big D’s obsession with rainbows: Ambika described them with such tender words, letting the descriptions hang tantalizingly, sometimes dripping with poetry. I found myself sighing to her that I wished I could see them, even if I knew she was fabricating them. Sometimes, one has to be blind to see the truth.

Only Grandpa Vyasa saw through my plight. He came up to me one evening and told me something to the effect of “Annoying now, legend later”.
Easy for him to say was the general thought then. He sensed it in that eerie manner of his and continued, “Remain blindfolded and you will be spared many a sad sight. Not only that, you will go down in the history of mankind and be talked about for generations.”

The lure was too much. I gave in. What still saddens me though, is the one time I decided to open my blindfold and look around, it was to see my foul son – that blot on humanity. That too I did for the sake of the legend.

Glad to have that off my chest! How does the rainbow look?

The world’s outpouring of grief for technocrat Steve Jobs has been unprecedented. Death seems to have magnified his personal appeal. Suddenly, the world not only talks about his family and his estranged father, but of his culinary skills, what a nice person he was and all things apple. Food blogs cry out about how they choked up while baking apple tarts and how he loved apple as a child with the same fervour as geeks crying out about iPads and iPhones. And to think it all started in a garage.

The garage has a mystic, romantic appeal in the makings of tycoons. Journalists writing his eulogy pumped up the garage appeal to the masses. In fact, I suggest those who don’t have garages yet get one pronto. Who knows? Our progeny may make it big and if they don’t, we will have ourselves and the lack of a garage to blame for it.

I wish to tell everybody that my parents’ home did not have a garage. Our scooter occupied either the front verandah or a part of our drawing room. That’s right! We didn’t need any toys to play on, we played on the real thing. Though I can’t say my mother was too pleased on rainy days when the scooter’s wheels would slide in alongside our muddy footprints onto the polished teakwood floors. But those are minor irritants in the life of mothers and children didn’t have to worry about them.

One never knows what life has in store for them. As the garage factor was missing from my life while growing up, I had to ensure that I gave myself a garage experience.

I lived in a garage when I first started work in Bangalore. I can’t say with entire honesty that it was beautiful, but it kept out the rain and taught us a lesson or two on bladder control on rainy nights. Obviously, the garage could not contain a bathroom and a kitchen – one corner already had the kitchen. The other corner the entrance. There really wasn’t place to add a bathroom. Garages are rectangular and that was the plan.

So, the bathroom was outside the premises and a heavy outpour meant getting soaked in the rain for a pee. One weighed the pros and cons (bladder and rain volume) and made the decision.

I digress, but the point is, I read so many things about Steve Jobs in the past week and almost all of them had the garage featured prominently. So much so that I threw my mind to my garage days and decided to share it. Now that the garage part of the story is intact, I can choose to meander about life in my usual manner, and lay that worry behind me. If ever anyone wants a garage story, I have one. Phew!

Please throw your mind back to the time you are holding the attention of all present. Your speech is flourishing, the mind drooling – powerfully cruising along with great confidence about a pet topic. A topic in which you are hitherto considered the expert, when somebody throws this at you. “How do you know?”

I don’t know about you, but there are only two ways to answer this question. One is uninteresting and long-winded wherein you whip out the facts from your bosom and lay them bare for the audience to consider, sift and form their opinion. If the audience is quieter than usual, then you go on whipping more and more facts till you fall into your own fact trap. The problem with this approach is that sometimes, I’ve seen the firm rudder flounder a bit in the wind and get into the “I agree with this, but on the other hand, I also agree with that.” boat.

The other can be interpreted in a wide variety of ways: rude, arrogant or funny depending on the tone and situation. Answers such as, “I know, therefore I know.” fall into this category.

Which is why when we saw the daughter’s to this question, we couldn’t help laughing and relishing the innocence of it all. 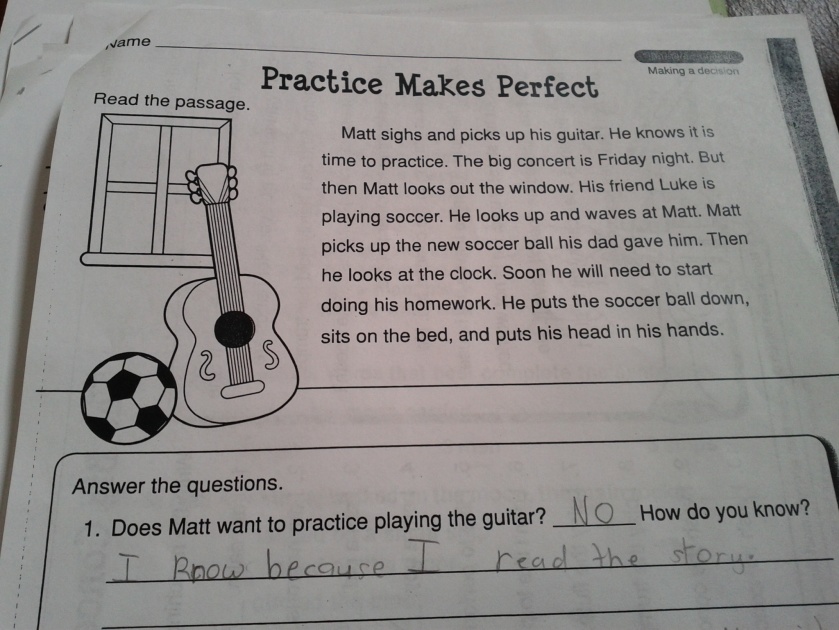