I suppose it is an occupational hazard of being in the echelons of upper management. Let a flowing river flow and pretty soon people start questioning why you are there, if the river is flowing perfectly well by itself. Put up too many dams and you have environmental groups shouting that their dearest wish is to see you drown in those very dam’s waters. So, what is a person supposed to do? I’ve noticed that anyone who comes in sees an immediate need to do something.

Give a child some clay and he will blend and mould the clay into flowers, or worms. Give him some building blocks and he will build something. Give him people and he will re-organize. There is a sort of dull resignation to these re-organizations that come over the ages.

But, this is new.

This company decided the change is not in making Paul report to Tom instead of Harry, but to make Paul, Tom and Harry stop emailing each other. Email can be a waste of time, but it isn’t without its advantages. Any day, give me email over SMS and pagers. I mistakenly thought that what these visionaries were going for was increased efficiency because of the barrage of emails throttling their system. Turns out I was wrong. I quote:

That’s why he hopes the company can eradicate internal emails in 18 months, forcing the company’s 74,000 employees to communicate with each other via instant messaging and a Facebook-style interface.

I don’t understand how this is supposed to work, but isn’t this a bit like saying “I will throw the wood chunks in the river, and you stand along and fish for those that have an interest to you.” Some days, you can stand fishing or wooding all day and come up empty, so, you decide that enough is enough and get down to do some work, when the crate of wood meant for you flowed down the message river, leaving you looking pretty stupid. 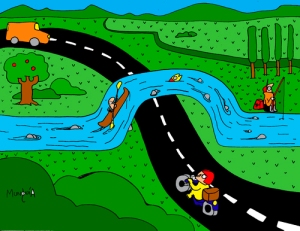 There is this though. One can always rely on the echelons to give us musing material.