Ten years is about the time in life when one knows the really funny stories from the better half’s past/childhood. You’ve probably met the aunts waiting to tell you about how they pinched your husband’s rosy cheeks and how he cried when he dropped the ice-cream. It is also about the time one unabashedly nudges them to regale the stories for those gathered for the after dinner storytime.

“Oh…tell them about the time you went to Darjeeling?”
“Which one? The one with the pooris or the train?”
Then you roll on the floor and say, “Both are funny. Start with the train one and if folks are upto it, we can work the poori one into tonight’s show!”
It is at this point that things start to go downhill. You know before hand when the jokes come and you guffaw before the funny spots and ensure that even semi-rotten stories get the laughs they may or may not deserve.

So, imagine my surprise that I discovered something really funny when my tenth anniversary rolled around.

Engage the Queen of England to an after dinner conversation, and I am sure she has many stories to regale. She may touch upon world politics, fame, money, charity, armies, economies, humanitarian aid, United Nations, monarchy, familial obligations, the Middletons, her grandsons and many more. I don’t know whether she is a funny narrator of stories, but I doubt she could narrate a story involving herself to such mirth and laughter as the one the love of my life did.

I am not sure whether I have described the husband’s school before – allow me a moment’s diversion while I do so. It is critical to the story. The schools is situated in Chennai, India and has the clarifying word ‘English’ in its name (Just to add that aura of sophistication.) I don’t want readers to dream up an image of the Metropolitan Chennai and come at my throats about English medium schools in Chennai. This is one of the poorer areas where any English is a bonus, and boys studying in an English school were considered elitist. The school may have ‘English’ in its name, and nowhere else.

For reasons fathomable to pre-teen boys alone, it seemed like a good idea that they should write to the Queen of England. Why not a cricketer or a movie star? Why the Queen? Nobody knows! Possibly one of the boys had a crush on Lady Diana and was too shy to admit it, and settled for her mother-in-law instead. Anyway…give my husband an idea like this and I can imagine the teenager being swept away by the notion of being the Queen’s correspondent. Apparently, his confidence was not brimming then and he decided to write to the Queen first and then brag to his friends after she wrote him back. A short story about obtaining the aerogramme (cost Rs.5 then) later; the letter was sent.

The rigour of evening kite flying and fighting with one’s brother eclipsed everything else, and the Queen was forgotten. And then it arrived. A letter bearing the royal seal of the Queen of England addressed to the boy in Thiruvottiyur Chennai. The news that he had received a letter from the Queen was discussed in hallways and Pallavan buses; on cricket grounds and roof terraces. Quite an event it must have been. I quizzed him on the contents and he said something about encouraging young talent to reach out to royalty.

A letter has the power to change a life. This letter may not have changed the course of anyone’s life; but it sure gave an ordinary boy the nerve to dream. 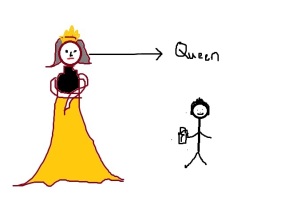 8 thoughts on “The Queen’s Correspondent”