I am going to go out on a limb and say that things could be better. On the other hand er.. leg, it could be a lot worse. So, on the whole, I have decided to not put my foot down and complain about the state of things.

I could not resist the above paragraph folks. So, thanks for letting me get away with that. The truth is that I have a hairline fracture on my ankle and am hoisted up on one foot for weeks. At first, the daughter remained in denial. She kept telling me that she can barely notice the limp in my stride, about how the foot would not pain if I don’t think about the pain etc. It was only later I found that her hidden agenda was making me believe I was perfectly fine. Fine enough to go to Disneyland for the Thanksgiving break. Well, we put a stopper to her Disneyland dreams when she saw me hobbling into the house on crutches. Even she knew that no amount of psychological counseling can get me to Disneyland at this point. So, she buckled down to a week-end at home and teamed up with the husband to "take care" of me.

The pair of them made a sufficient noise about getting me to rest over the week-end and said I was to remain upstairs while they cooked up a Thanksgiving lunch for me.
Very gallant of them of course, but I have to say, I have whipped up many a meal in my life, but rarely have I made such a noise about it. I mean neighbours heard pans clanging and music blaring. Not to mention questionable noises and smells. After about an hour of this cacophony, I asked them what the menu was, and I got the following:

Pan-seared vegetables:
What that means is that the duo had cut up vegetables in haphazard shapes and let them burn. My longish nose picked up a smell like burning rubber and I asked them in a slightly alarmed voice whether everything was under control.
"Oh no….!" moaned the chef
"APPA! You said not to cover it. If we had covered it, amma would not have smelled the vegetables burning!" the sous chef’s accusatory tone rang out. I must say I would have preferred it if she did not burn it at all in the first place.

Potatoes with a hint of Cumin:
I distinctly heard the husband say "OOOPS! The lid just fell inside and it plopped all over."
The daughter rang out, "What is that appa? You said chilli powder, but isn’t chilli powder red? This one is brown or is it green?" I decided I did not want to let my imagination explore what the powder might be, but a few seconds is all it took for me to realise that the "Oops" was the Cumin bottle.
I heard them splashing water on the pan. They must have washed the cumin off because by the time I ate it, they were boiled potatoes.

Lentils with the freshness of roma tomatoes:
The dal was fine – only in the last moment, the sous chef decided that she did not like tomatoes and the Roma t’s retained their freshness.

I groaned as I hopped into the kitchen. Every single spice bottle was on the counter and every inch of counter space was full. I must’ve looked a sight because the husband said he was going to clean up and that I had come too early. The daughter said that if they had aprons, things might have been better

And so it goes … never a dull moment in the nourishncherish world.

PS: My friends and neighbours have been wonderful they’ve sent food across, so the kitchen is holding up after the last bout of cleaning. Thanks all 🙂

Our family loves Diwali. The light seeps into our hearts and our inner self glows with all the mellow happiness of good food and excess sweets. President Obama makes sure that he wishes folks a happy diwali too and I loved his message urging us all to remember our less fortunate brethen as we celebrate this wonderful festival. I tried to beat the greeters, but by the time I went online and blogged about a Diwali, folks were already losing the mellow looks that ghee and sweets bring on.

In fact, they seem to have gone a step further and are vying with each other to act nasty. Like this open challenge and I quote:
"A local religious leader has announced a reward of Rs 5 lakh for anyone, who spits on lawyer and BJP MP Ram Jethmalani’s face for describing Lord Ram as a bad husband."

Hardly the spirit of a wonderful holiday to pay good money for spitting at folks. Yet there it is: religious leaders are the ones apparently loaded with money enough to squander Rs 5 lakhs for some precious spittle. Ugh.

This seer went on to proclaim that "A threat presupposes violence and spitting is a harmless non-violent act." I doubt whether his stance would be the same if he were at the receiving end for some reason.

PS: I am not going into the the whole Ram-is-a-bad-husband argument for obvious reasons.

I’ve read through a fair share of job listings. I remember looking in the Indian newspapers as a girl, hoping to find some hidden gems of novelty, and was almost always rewarded. If nothing else came up, there was at least the seedy lawyer asking for someone to be employed in some capacity and almost always had a combination of the words: prosecuting, witness, clerk, short-hand, typing etc. in legalese. (Lawyer offices are incapable, by design, of simple sentences and take pride in complicating things.)

However, I must say this Macedonian minister takes the cake. He wants to employ certified genii as assistants. He would not settle for any IQ scores below a 140 it seems. Apparently, the intelligent minister has not stopped to ponder about why a person endowed with an IQ of more than 140 would want to work as his assistant.

Maybe, somebody would be kind enough to send him Koshik’s resume for the position if Koshik is interested.

Who is Koshik? Well, he is an elephant in a Korean zoo.

Koshik is astounding scientists there with his intelligence. Koshik can utter more than a few words in Korean, and is evidently picking up human speech patterns.

The question, of course, is whether the Macedonian Minister will he have the IQ enough to understand what the elephant is telling him?

For those who haven’t read Curious George and his adventures, I suggest you do so. I love the little monkey and his wonderful adventures.

This time, Curious George was in an adventure of sorts with The Man with the Yellow Hat, Professor Wiseman and Tinker Bell the naughty fairy.

When Curious George the monkey heard that Tinker Bell, that amazing fairy, was going be at large, he was excited. He was a curious monkey and fairies, especially plucky ones like Tinker Bell, always interested him. He climbed on to the Man with the Yellow Hat and said, "Oooh oohh aaa aa! Awwww! ooh ooh aaa aaa!" The Man understood him as usual and arranged for little Curious George to go to the party where Tinker Bell was going to hang out with her friends.

It was a wonderful party and the Man-with-the-Yellow-Hat was a big hit. He could barely fit into the pictures with his tall hat. Even Captain Hook forgot about being evil and relaxed in the radiating yellow of the Man. Passing cars slowed down mistaking the Man-with-the-yellow-hat to be a yellow traffic light. But Tinker Bell the fairy swooped in with her sparkling green wings and set them going again. All in all, it was a wonderful party even though Professor Wiseman acted out of character on occasion. You see Professor Wiseman had come for the party and was talking to the Queen when a wonderful witch decided to kick the party up a notch by getting folks to dance to “Gangnam Style”.

Curious George and the Man-with-the-Yellow-hat loved Gangnam style (http://en.wikipedia.org/wiki/Gangnam_Style) and really wanted Professor Wiseman to dance. Professor Wiseman rose to the challenge and tried to dance. But she chose her steps poorly and landed up twisting her ankle. Tinker Bell tried to heal Professor Wiseman’s ankle, but she was tired and there wasn’t enough magic left for an ankle to heal.

Curious George is now Professor Wiseman’s helper and plays with her whenever he can to make sure he distracts her mind from the twisted ankle. Tinker Bell is spreading her magical love about the place and making Professor Wiseman feel comfortable. 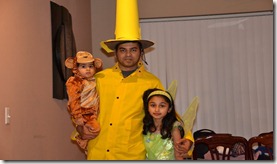