I spent the morning on the curb wearing a jacket over my frumpy night-clothes with an infant in my arms. The mists had not yet lifted, and I yearned for the warmth of the bed. Unlike me, the infant was fully awake and extremely excited at the sight before him. He gasped in awe and chuckled with glee. We were watching the garbage truck and the driver do his duty. 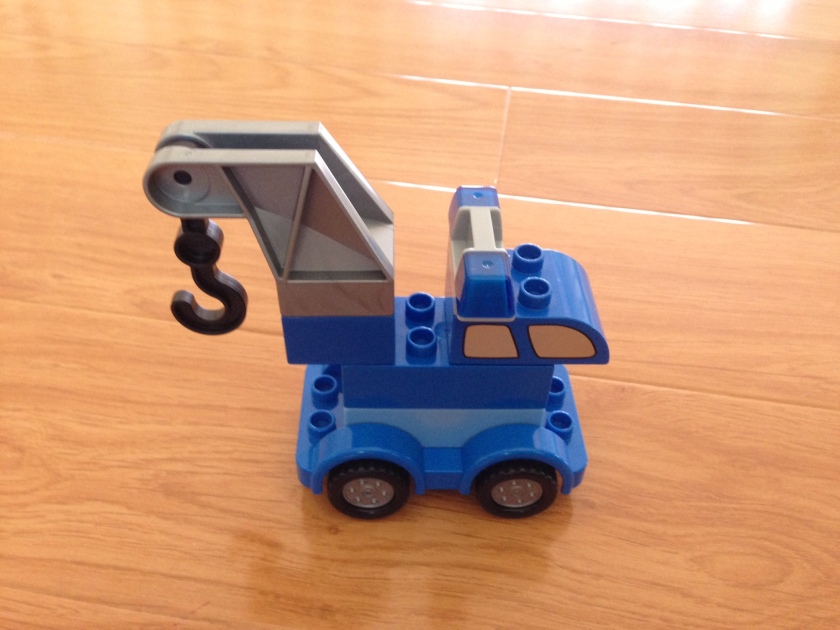 My mind was pulled back 15 years when the similar thing was being done for the nephew. His ambitions wavered with time of course. But the solid one for a few years was to be a garbage truck driver. The garbage truck drivers must look grand to their little eyes: Sitting high on their seats like exalted thrones, manning the wicked machines and watch as cars steered respectfully from them.

I remembered taking the nephew on trips in India more than a decade ago. He would insist on waiting for a bus with two ladders in the back. Like fools, we would let buses go by waiting for the two-laddered ones, because he believed that those buses traveled faster.

Today is the nephew’s birthday and I watch with love and pride as he looks to enter college in the fall.

A honk pulled me back to the present. The son was beside himself with glee. The garbage truck driver was honking and waving at him before turning away from our street. My star-struck son and I came home to call and wish my nephew a happy birthday!

Walter Hunt was goofing around one day with a metal wire. His head was deep in thought about the $15 debt he had to pay off. He bent it (the wire I mean) and molded it and by the end of the exercise had come out with the world’s most useful thing: a safety pin.

When Walter Hunt toyed around with a metal wire and got out a safety pin, he had no idea how many potential cabinet ministers would be affected by his invention.

Allow me to elucidate:
Any girl who has travelled by public transport in India knows the shame of being hassled by members of the male clan. Crowds spike their spirits as they fall on you, or grab at you. My constant companion through these horrible times was a safety pin. I would unleash the weapon on those whose intentions were not noble. A small prick would do. A sudden hiss and a sharp withdrawal often resulted. It was most gratifying because the prickee could not complain. What could he say? That he had been jabbed with a safety pin by a girl for touching her inappropriately?

While education was supposed to have made things better, clearly things have not improved. Television serials still show the end of every argument between man and wife stopping only with physical violence being inflicted on the wife. Movies still portray that harassing heroines is fine as long as a hero does it.

The rape case in the nation’s capital in December shook people out of their apathy. In reaction to it, the Indian parliament was forced to take action and came up with some laws. During the debate about the anti-rape bill, Sharad Yadav’s comment about girls drew flak: “Who amongst us has not followed girls?” he said to general laughter in the room.

So just saying, I might have pricked some cabinet ministers too.

What is more disturbing? The cabinet minister’s comment or the laughter? Why didn’t someone poke the bubble with a safety pin?

Sometimes I think a monkey would do a better job with a camera. But on the other hand I think, people should open their minds a little more to appreciate true art. What is art? Is it something that kindles some kind of emotion in others? What if it brings joy to others?

The other day we found this gorgeous field stretching out for a few miles carpeted with yellow flowers. My heart whooped with joy and I insisted on getting there on the week-end for a picture shoot.
“I will put this up on Facebook!” I cried. Thrilled at my unique idea, we went there for our picture shoot. Saturday morning, I found the place jam-packed with Facebook-profile-picture-takers. People I tell you! Tut! Tut!

When the daughter was much younger, I used to swing her around me really fast. We have a beautiful picture on the Hawaiian coasts doing this.I wanted a similar one of me throwing my son up in the air and catching him. I had to throw and catch a few times before we got this picture. But I totally loved it, and promptly made it my profile pic on Faceb.

The daughter is tall for her age and has outgrown the swinging-by-mother stage, but believes that her father, the hero, can still catch her as she jumps in the air. I tried telling her that she is too old for that, to which she says, “But appa is really strong, and I can jump! He doesn’t have to throw me.” Put something like that out to the husband and he can’t resist. He summons up his imaginary biceps and steps forth gallantly to make her jump and catch her. I gingerly took the camera, aware that I can’t take the same number of chances he took to get a good picture.

I suppose this happens to wildlife photographers all the time. They lie waiting for the lion to jump, and the lion roars and skips instead. My feelings were similar. What is my lioness skipped?

I focussed and refocused yelling “1-2-3” loud enough for horses in neighboring fields to jump. They did a marvelous job and she jumped- much higher than I expected and got this picture. 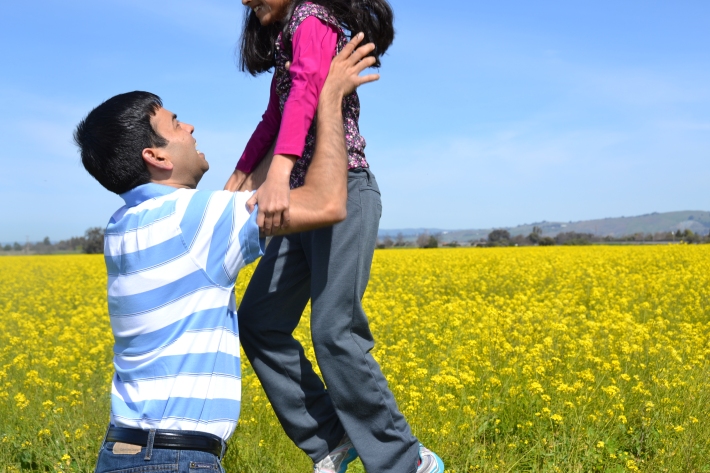 I totally blame it on her. I mean I had my camera focussed for where I thought she was going to jump and she shot past it. Whose fault is that really?

My school did a good job on me with its motto: “Never Give In”. So what if I got one bad picture? I plowed on. This time the strong man wanted a portrait. I attempted to truly give him the picture of a lifetime. I’ve always wondered why photographers show off about blurring certain objects and making others sharper. How hard can it be? See? 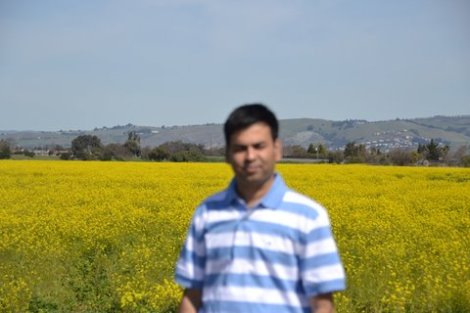 Like the daughter kindly pointed out, even the houses in the far background are sharp. I challenged the husband to take a picture of me like that and he couldn’t. I believe I took the harder picture. He was a bit upset initially, but the bad pictures had all of us laughing (quite heartily I might add) at my expense – so that is true art in my opinion. Go on…’Like’ my pictures please.

I remember it vividly. The father came home beaming one evening. The President of India was visiting our School and the general populace was abuzz. I remember all of us feverishly polishing our shoes for days, like the President’s prime task of the day was to check our shoes. This activity was encouraged almost with indecent glee by everyone. Really, I don’t know why we polished our shoes that hard.

So, why was the father beaming? Oh..yes…sorry, I lost my train of thought and got carried away with the shoe-polishing. The father was given the honorable task of signing all the permit cards into the auditorium where the President would give his speech. He thought that the honor was bestowed on him because he was a responsible member of the teaching community etc. I told him that it might be because his signature was the hardest to emulate. His signature is like a hot cooked ‘Cup-o-Noodle’ slipped off your hands and splashed across the pages. Something like this cool 3-D pen.

He laughed at my description and selected his best pen to get started. Around the 100th card, his hands started paining. He complained and carried on. By the time 500 cards were signed…well, there is no need to go into what shape he was in.

Every now and then, situations arise where my esteemed signature is required on paragraph 3.4 on page 12, and then again in 4.2 on page 16. Fifteen such pages later, the joy of using a pen (even a special one) fades a little, and I think of the father and the President’s visit. Maybe, one of those ‘Software License Agreements’ are the best. You know the ones where you don’t read what it says and just hit the cute looking ‘Accept’ button to proceed? Those ones.

Anyway, I noticed small things that can make the drudgery of this better. Some people have the forethought of placing those little placeholders to indicate the place of signature, but I recently had a 300 page stack without the placeholders and I missed them so sorely.

It is little things that make a difference. I have always marveled at the housekeeping staff in places I have worked in. For the most part, you don’t see them around and yet, everything is available. That is the kind of efficacy that the President of India would have liked to see. Not polished shoes. Anyway…

Imagine my joy every time I walk into our mini-kitchen and see the tea bags placed like this?

What are the little things that you notice that bring you joy?

He was at the age when digging one’s nose in the school grounds was not yet something to be ashamed of. Probably driven by the comfort level this accorded him, one of the boys picked up a frog from a pond, in the fond hope of adopting it as a pet. Pets, as my learning-to-debate daughter will tell you, can serve as great companions. Frogs have more sense than we credit them with, however, and made a swift escape that very night. But by then, he had acquired the name ‘Croaky’ and the name frogged him through college.

One may argue that his actions led folks to croak his name.

I have also seen parents play fiddle with their children’s futures by giving them unique names: Impressive names such as Lionel (changes to Looney) or Fourswarth (forsooth)

But to make a business of this: Maybe, I should just wait and watch to see the name being chosen for this child.

I quote:
Baby Ballot will create a list of baby names based on what’s trending and their sponsored advertisers, then post the final list of names online on March 18. Users worldwide will be able to choose one girl name and one boy name each from the list of names provided until March 22 when voting closes. The name with the most votes for each gender will be the name of Natasha’s future boy or girl.

I hope the collective wisdom of random jobless people on the internet will not lead this child astray.