The husband may not be able to carry a tune to get the car parked, but you can’t fault him with lyrics. In fact, he once won a singing competition.  The judges pleaded with him to not sing, but to simply recite the beautiful words in the song, and their team sailed home with the cup (or whatever it is these college competitions have the budget to give).  He won it solely on the strength of his lyrics. For being able to appreciate the beauty of the poetry in the lyrics. The husband’s Antakshiri prize is rather like Bertie Wooster’s Scripture prize, and is much bandied about in our home.

It is also the husband who stops a song from lilting and mesmerizing and repeats the words – his eyes shining with the hidden meaning in the rhythmic poetic delights of the verse. I must admit some of the songs have such a beautiful lyrical quality about them, that had he not stopped and replayed them, I would have been completely lost in the melody of the piece. When your breath produces a rainbow or the mists clear to reveal your innermost thoughts or whatever it is, it makes you smile a little at the metaphor. Things you would not ordinarily stop to think and appreciate.

Incidentally, the guy who waxes lyrical at hidden meanings in poetic songs is also the guy who listens to ‘Why this kolaveri kolaveri dee?’ and introduced me to what is known as ‘Gaana’ songs. Viz. stuff that makes you want to sit down and pull out each strand of hair one at a time.

One day the daughter set out to make me listen to some of the songs that their generation listens to. You know the cool stuff?  So, we did, and I was wondering when the husband who usually listens with her, will stop the song to appreciate and discern inner meanings and things, but he did not find the need to:

Won’t you have a cup of coffee with me? We used to drink coffee together, but don’t anymore. I miss you when I drink coffee these days.

There was no hidden meaning – could the coffee refer to life? But still there was no building on the coffee theme. Hardly the kind of stuff that needs the brain cells to stir.

“Are there any other songs that we can listen to – you know where it is not a guy yearning for a girl, or vice-versa”, I asked. “Or with those wonderful hidden meanings like in poems?”

The daughter shook the head. “Well, teenagers mostly listen to stuff about love”, she said rolling her eyes. “Especially famous songs ma – it is like you are just talking with a guitar strumming in the background.”, said the daughter scornfully. 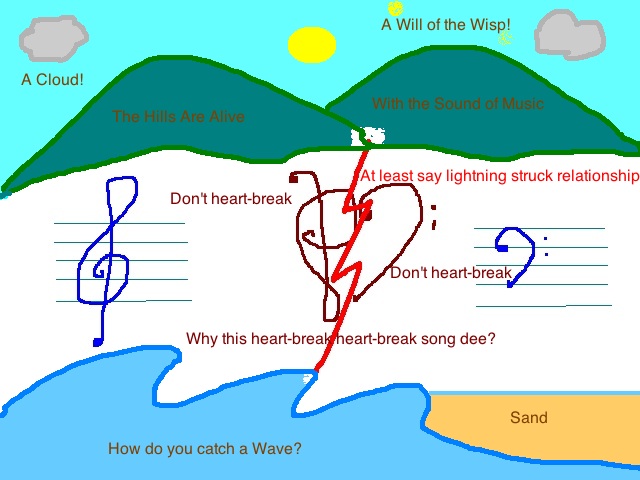 I am not a teenager anymore, so I can’t say whether the teens today are happy with the fare laid out in front of them, but I would have liked some variety. Sure, it is the time for the stirrings of the teenage hormones and what-not, but that is not the only awakening one finds in the teenage body and mind is it?

It is also the time for confusion about life and career choices, the time when it truly feels like you can tap into your reserves and see how well you can perform in that game, or how competitive you can get on that track. It is the time the mind is grappling trigonometry and unraveling the beautiful complexity of organic chemistry, the time you are surprised at the lucidity with which artists can tap into their inner stamina and creativity and unleash things on canvas or on stage. It is the time for broadening of our intellectual horizons, and the time to goof off and make questionable choices with friends. It is the time you freak out after lighting candles on the Ouija board.

It is the time you read Dostoevsky and ponder upon life. It is the time you make fun of soppy love stories, but secretly hope for your own Prince Charming one day. It is a time of intense moral learnings and the time when crushes are a part of life.

You know how we see these caricatures in cartoons, with an abnormal potato sized head tottering on pea sized bodies? It seems the song industry is like that when it comes to love. Sure love is a potent force, but is all love of the sexual kind? Surely not. Why not write a beautiful song about friendship, why not write about abrasive teachers and the camaraderie that goes on with the children while dealing with it? Or a funny song about goofing off PE.

Teenage angst is a whole package, it does not just mean broken hearts and tears when people fall apart. If song lyrics are stuck in teen brains all day long, why not give it some work and smile inwardly when you get that hard metaphor?

Here is a call to all you smart teenagers, pre-teens out there. Dazzle us with your breadth and depth of your making sense of the world. For as adults, we still don’t know, but most of us have given in to the familiarity of routine and the rigmarole of paying bills. What we need is the thirst and energy of youth, and that you can gift to us with your poetic lyrics, your songs and your view of the troubled world.

2 thoughts on “The Noetic Touch to the Poetic Muse”