We were listening to the audio books of the Hitchhikers Guide to the Galaxy over the numerous trips we took during the holidays. There is a section where the Earthlings manage to meet the creative team that designed Earth. The designer walks out very proud of his latest fjords in a section resembling current-day Africa, and I remember being awed. How marvelous would it be to think up new concepts, new colors and new landscapes. What shades to give the acacia tree bark? How about the Palm tree bark? Rustic brown or brown acacia sparkle? How about hay? Should hay’s shade be different from the dried grass bundles?

I suppose it will be a salutary task for everyone to create something beautiful from scratch just to see the myriad choices and decisions one is faced with. There is beauty in creationism. Much more than in consumerism.

Henry David Thoreau would have been pleased indeed that his words about the world being a canvas to the imagination, was taken to heart.

The activity we had chalked out for New Year was painting the daughter’s room, and talk of shades of colors was ripe. I never knew that this many shades of light blue existed with such exotic sounding names.

If somebody had given me the list of colors from the paint section of the hardware store, I could have stumped my audience in Crocodile-Crocodile. Those of you who have not had the pleasure of playing Crocodile-Crocodile should do so at least once to experience the joy of looking up new colors. “Crocodile Crocodile, may we cross the golden river?” is a stellar game in which the crocodile has to catch a person who is attempting to run across the river (strip of land) if they don’t have the color on their persons.

Crocodile, crocodile, may we cross the golden river?

Yes you may. If you have Turquoise Blue.

What is Turquoise Blue? Is it the color of a turquoise? Is a turquoise a turtle or a tortoise or a porpoise or just a turquoise who is blue? 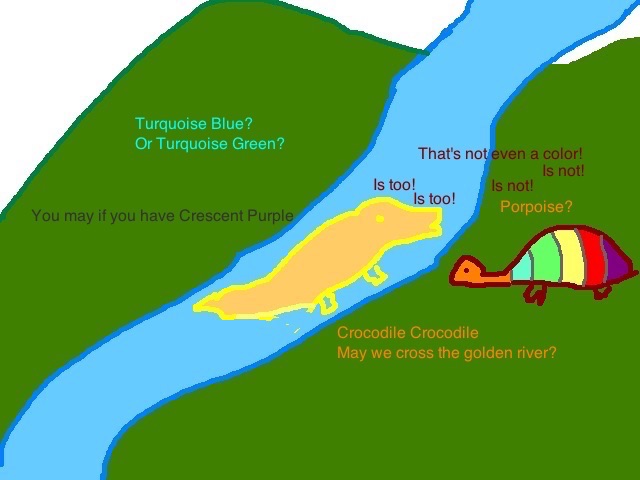 Anyway, once the paints were in, the smell of fresh paint along with the envisioned end product of a beautiful, clean wall was enough to get us going. There we were, looking ebullient and hanging off the walls at various angles and heights with rollers in our hand. Music played in the background and talk turned to various topics, including the dumb painter, Randy Pausch’s Last Lecture, Tom Brown’s School Days, the Asian Paints advertisement featuring a boy who looked remarkably like a cross between Mark Twain’s Tom Sawyer and R.K.Narayan’s Swami which of course led to Mark Twain’s short story of Tom Sawyer and his friends painting a fence.

After a few hours, I noticed that the toddler son had taken a break from painting. I asked him what he was doing. ‘Nothing.’, he said. ‘Just sitting and seeing you paint,’ . There he was sitting criss-cross-apple-sauce on the floor with his cheeks cupped in his hands looking enamored with the soothing aura of activity around him and content to absorb.

It is an answer I love to get from children. In their world, it is okay to say they were sitting, and doing nothing. It is those of us who have bought into this idea of being busy who loathe the term.  Sometimes, nothing is good. Maybe we all need to carve out worthwhile moments of doing nothing, so we can do something worthwhile.

“I soon realized that what I really wanted was time to ruminate, time to observe, and often time to be alone.”

It reminds me of this drawing that occurs often in Brain Pickings articles : Everybody should sit quietly near a stream and listen.

In fact, I think it would be phenomenally better for our current President to do nothing at all. That will be something, and something is better than nothing.

2 thoughts on “Nothing For Something”