“Let’s not watch this – it is depressing, and some of that stuff makes my blood curl.”, I said as the daughter suggested some gothic fiction. It was the week-end before Halloween, and we were picking our Friday evening entertainment. Never an easy task.

“Fine! What do you want to watch?”

To her eye-roll, I said “No really! You see, there are so many things in there that I wanted to understand as a student.  I plodded along to the library and I got to admit, the Physics books in there. “ I gave a shudder here, and I fully meant it. “I suggest you curl up with one of those tomes in our library looking jaundiced, pale, and excellent cures to Insomnia. I thought some of them needed vitamins, sunshine and exercise to regain what Doctors call a healthy glow. “

So, we sat together and watched a Cosmos episode by Neil deGrasse Tyson on global warming. In his slow, sure voice, he rumbled like the volcanoes on Venus that set the poor planet into an irreversible green house cycle.

We have twenty years at the current rate to stop us from going into an irreversible state like Venus.

The daughter gave me a significant look .I gave her a more sig. look, and we sat there looking like stuffed frogs with s. looks etched on our faces digesting the info. “How could you think this was okay to watch, but that movie was too scary. This is the scariest thing I have ever seen. How do you think it will all end?” said the daughter sounding worried, and deeply stirred.

A few days later, I read out a passage from the book I was reading. Woolly: The True Story of the Quest to Revive One of History’s Most Iconic Extinct Creatures. (Related post: Mankind trying to resurrect the woolly mammoth by impregnating Asian elephants with mammoth genes.) 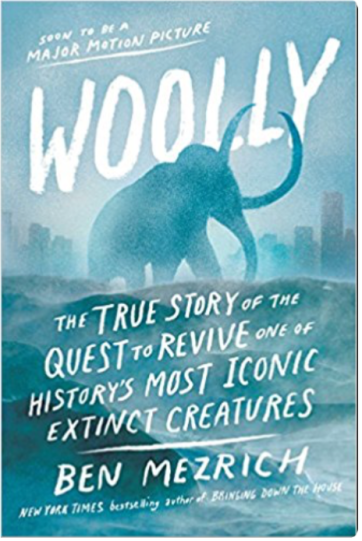 Pleistocene park  – Using 160 square kilometers of Siberian Tundra given to him by the Russian government, Zimov’s goal was repopulating the area with modern equivalents of prehistoric animals that had adapted to Arctic conditions (moose, Yakutian horses, Finnish reindeer and even North American bison.) … To re-create the effects of the Woolly Mammoths on the land, he’d bought in a World War II tank …. Punching holes in the snow, … , using the tank treads to mimic the continual stomps of Mammoth feet, he’d worked the land, year after year. And along the way, he’d accumulated data that were staggering in their implications.

Within his 16- square kilometers refuge, he had lowered the permafrost temperature by an average of fifteen degrees.

We change the world just be being. I remember watching a video by National Geographic in which they chronicle how 41 wolves introduced in the Yellowstone park, changed the ecology and even the physical structure of the park.

If that was the case with 41 wolves, what would introducing Mammoths do? Would it save us from the brink of extinction or introduce problems of the kind we hardly envisioned?

We never know the ramifications of our creations. I mean we are a species who has unintended consequences from a ‘Like’ button on Social Media.