I picked up a light hearted book that outlined how journalism was done 100 years ago: Scoop By Evelyn Waugh. Written in the 1930’s, the book deals with how newspapers made do with telegrams from remote locations to fill newspaper columns: How they decided ahead of time on the stance to take, the line to pitch. Journalism was and is a series of Scoops. Which nugget gets scooped by whom?

The book is based on William Boot, a thoroughly good-natured hedgehog type of fellow, who writes the nature column about life in the English countryside. One week his column writes of the country mouse, and the next week about thriving lobelias. Up in high brow London, he is mistaken for a dashing up-and-coming novelist, also Boot, and asked to go to Ishmaelia, a fictional country in Africa to cover the news. Given no choice, he embarks on the journey, and learns a thing or two about journalism from his journalist pals.

Corker looked at him sadly. “You know, you’ve got a lot to learn about journalism. Look at it this way. News is what a chap who doesn’t care much about anything wants to read, and its only news until he’s read it. After that, its dead. We’re afraid to supply news. If someone else  has sent a story before us, our story isn’t news.”

William Boot is not only ignorant of the scoop business, but distinctly inept at keeping his bosses in the know. His telegrams read like stories; and lack buzz and content. When asked by his head office to send regular updates, Boot replies, that nothing much is going on, and that the weather continues to be fine.

The sort of missive that drives his editor mad. “How am I to fill a column based on the weather being fine?”

The dilemma is real. Nobody wants to know when things are going well, and the weather is fine. The populace wants sensational news, and if there isn’t any, they have no qualms about creating some.

Purely by accident, William Boot uncovers a plot to overthrow the powers in the country. When he is composing the telegram with his first real piece of news, he receives the sack from the head office.

Nothing much has happened except to the president who has been imprisoned in his own palace by revolutionary junta …. but governess says most unusual lovely spring weather …. bubonic plague raging.

He got so far when he was interrupted. Frau Dressler brought him a cable: your contract terminated stop accept this stipulated months notice and acknowledge stop beast.

William added to this message, Sack received safely thought I might as well send this all the same.

The book is not as engaging and funny as its critics claim, but the premise of the book makes for a charming plot. It is amusing to see how little things have changed since the days of the Telegram: our telegrams arrive almost instantly via tweets, but the essence is the same.

In the current era of news, and fake news, how does one discern truth, and in which cases does one have to bother to do so? 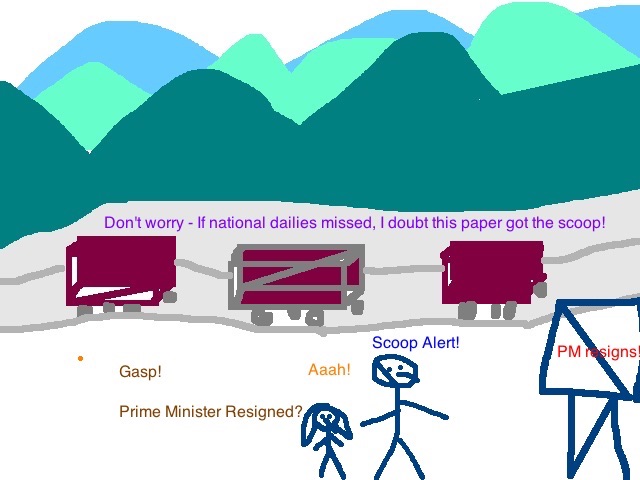 I remember being about a decade old, traveling in South India, when I saw the headlines from a local daily: “Prime Minister resigns”. I gasped, and tugged at my father’s arm, and showed him the headline. Apparently, he had resigned from the milking committee of a farm or some such thing.

That is my earliest recollection of questioning the sanctity of print. Up until then, I read anything printed with a wholesome innocence assuming purity of thought and intent. The father noticed my shocked expression, and we went on discuss the nature of the Scoop, and the thrill of Sensationalism. Television had not yet entered into every home, and one waited every morning for the newspaper to bring us news of the wide world. A whole day in which to ruminate on what one read.

Aristotle apparently wrote, It is the mark of an educated mind to be able to entertain a thought without accepting it.

Did he really say that? We don’t know.

Sensationalism and Scoop-ism have steadily chipped away at the hallmark of ruminating and discerning narratives having a semblance of truth.