The children and I were reading the Butter Battle Book, by Dr Seuss again: A marvelous book that never fails to enlighten : the bigociously atrocious weapons we are capable of creating, how littlyfully small-minded we are when we come to self righteousness,  and the idiotic ends to our means. It makes me want to take our brains apart to see where bravado and ego reside and short circuit them, to see if it results in a fuzzy ice-cream show in the pupils. 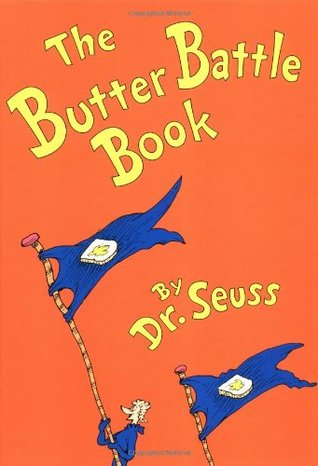 Written in 1984 this book is a simple parody of the nuclear arms race, and is chillingly relevant today.

Soon, both sides start fighting by using weapons of increasing grandeur and magnitude starting from the Tough Tufted Prickly Snickle Berry Snitch to the Eight Nozzled Elephant Toted Boom Blitz. The book finishes with the Yooks and Zooks sitting on either side of a wall threatening to drop the Bitsy Big-Boy Boomeroo, signifying the nuclear threat.

Around the same time that Dr Seuss came out with this brilliant book for children, another one of my favorite writers delivered  a series of Gifford Lectures. Titled ‘The Varieties of Scientific Experience : A Personal View of the Search for God’ , Carl Sagan goes on to explain in one lecture how we fail to comprehend the true magnitude of the nuclear problem ahead of us.

The bombs that destroyed Hiroshima and Nagasaki – everybody’s read about them, we know something about what they did-killed some 1/4 million people … The planet Earth today has 55000 nuclear weapons, almost all of which are more powerful than the bombs that destroyed Hiroshima and Nagasaki and some of which are, each of them, a thousand times more powerful.* Some twenty to twenty-two thousand of these weapons are called strategic weapons, and they are poised for as rapid delivery as possible, essentially halfway across the world to someone else’s homeland.

*By 2006, the world nuclear arsenals had been reduced to about 20,000 weapons-still roughly ten times what would be necessary to destroy our global civilization. the principal reductions since 1985 were due to the 1993 Start II Treaty between the United States and Soviet Union.

“Twenty thousand strategic weapons in the world is a very large number. For example: lets ask how many cities there are on the planet Earth. If you define a city as having more than 100,000 people in it, there are 2,300 cities on the Earth. So the US and  Soviet Union could, if they wished, destroy every city on the Earth and have eighteen thousand strategic weapons left over to do something else with.

These lectures were delivered in 1985, the numbers have definitely been revised from thereon. A number of countries have also harnessed the power of nuclear weapons, even though there have been treaties and agreements to restrict its use.

Robert Oppenheimer, credited as being the ‘father of the atomic bomb’, when he witnessed the test of the nuclear bomb over the desert in New Mexico was supposedly reminded of a text in the Bhagawad Gita.

If the radiance of a thousand suns
Were to burst at once into the sky
That would be like the splendour of the Mighty One…
I am become Death,
The shatterer of worlds.

With the rise of autocracy the world over, what would it take for us to save ourselves this time around? For all our brilliance in developing the bomb, we have yet to develop sound defenses against it.