His voice  quivered with excitement as he read the page out to us.

Never mind that it was early in the morning, and he did not yet know that the  morning tea was working its way slowly through the cells waking them up. The cells were hitting snooze like the body they reside in usually does with the alarm clock. Yes, things  were getting off to a slow start in the old body. The son, in sharp contradistinction, woke up like a light bulb switched on to full power with the opening of the eyelids. He shone brightly, and his vocal chords took on the  timbre of the morning bugle as he trumpeted the queer finding on Time.

To this legible response, he prattled on reading aloud to us from his Encyclopedia of Queer Facts.

“Yeah! It was in the year 46 B C, King  Julius Ceaser corrected the lunar  calendar.  This year became known as the annus confusionis or the year of confusion, since the year  had 445 days! Imagine how our  school must have felt!” he said looking up from the thrilling page.

Time has always excited him – what  it is, how do we measure it, why does it always flow forward and never backwards? 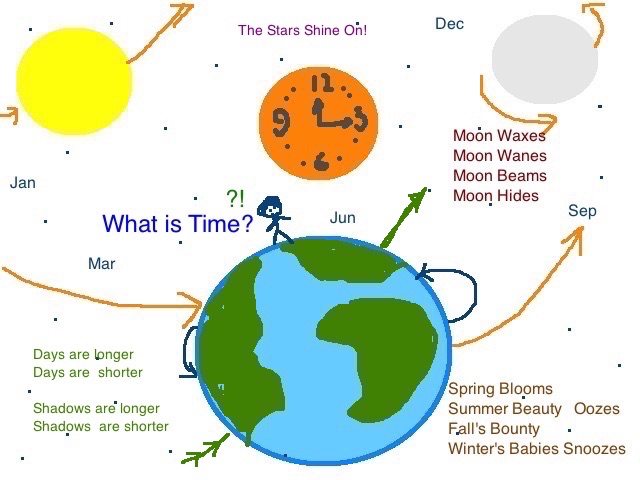 I poked my cells up into waking up – it seemed the decent things to do in the presence of such excitement.

It must have been enthralling.  Only, school as we know it today was not in session then – schooling as we know it today only came into existence about   200 years ago to equip people with the ability to sit in one place and learn to get used to it.

So they probably continued with their statue making and war-ring even though the seasons were completely out of whack with what was happening around them. What did they name the months? It must  have been an exciting time to be on the committee determining such things! I wish I could go back in time and be a fly on the  wall for those meetings, instead of the ones I  usually go to.

“Isn’t it amazing the  kinds of things human beings  have figured out?” I said, “And, then we used this knowledge to build on it, and build some more. I suppose it will only truly get boring when we  have nothing to keep us curious. Thinker & Tinkers!”

This was probably the conversation that inspired me to read about Nicholas Copernicus.

I have often marveled at how Thinking Mankind figured out our place in the Cosmos, the fact that Earth  is round, rotates on its axis, and so much more. After all, there were no spacecraft beaming pictures back to us then. The irony was not lost on me, that had we not figured out these things, the spacecraft could not have been built at  all. How  would we  know escape velocities and  thermodynamic thrusts and gravitational pulls in the first place?

This year is a leap year, and a reminder that we can figure out when we need years  of confusion, and when we need to just  look upon  the years of confusion benignly  to  stir ourselves towards better things. Like Jane Goodall said:

“Only when our clever brain and our human heart work together in harmony can we achieve our true potential.”  – Jane Goodall