It had been another long day, and as the clock ticked towards midnight, the body yearned for sleep, but the mind looked longingly at the tsundoku pile, and craved for some quiet moments of solitude. I peeked out of the window, and the moon sailing high through the skies tugged at my heart. There is something so intensely beautiful about catching sight of our  lovely cosmic neighbor sending its mellow moonbeams through the leaves at night.

I looked for a word that captures the phenomenon, but there isn’t one.

There are two words in Japanese that come close (the Japanese language has such amazing words for admiring wondrous nature around us.)

Kawaakari ( 川明かり – a word depicting the evening reflection of light on water, or in some cases can refer to the reflection of the moonlight off flowing water.

I had just started reading The Sea Around Us by Rachel Carson. In the first chapter, Rachel Carson takes us with her steady voice into a time on Earth before the seas were created. When the planet was still heaving and churning its metallic ores, hot searing waves of liquid settling into a semi-liquid state in its outer cores. She wonders then about the question, how were the oceans formed?
“So if I tell here the story of how the young planet Earth acquired an ocean, it must be a story pieced together from many sources and containing whole chapters the details of which we can only imagine.
For although no man was there to witness this cosmic birth, the stars and moon and the rocks were there, and indeed, had much to do with the fact that there is an ocean.”

Then, she leads us from this fiery place in the cosmos with the sun heaving its solar flares, the earth itself arranging itself into concentric spheres with hot, molten iron at its core, and an intermediate sphere of semiplastic basalt , the outer layers of granite and basalt. And then gently she lures us into the possibility of the moon and the ocean being related to each other.

“The next time you stand on a beach at night, watching the moon’s bright path across the water, and conscious of the moon drawn tides, remember that the moon itself may have been born of a great tidal wave of earthly substance, torn off into space.”

How can one not be mesmerized by the creation of the moon? Was it truly hewn from the surface of the earth (The moon’s density does match the density of the outer crust). The hypothesis that the moon was hewn away after massive solar tides exerting a pull on semi-molten Earth is based on the theory that the large portion thus hewn away left such a large scar on the surface of the Earth. A scar that would continue to shape Earth and its lifeforms for millions of years afterward: The Pacific Ocean.

Later, as the Earth cooled and clouds formed from the steam rising, the rains started. Pouring onto the hot earth for years – initially almost immediately evaporating into steam, but eventually collecting as water – forming the first oceans.

It is, of course, fascinating that we still do not know for sure how the moon was created. There are several theories – theories of violent impacts, random objects being attracted by gravity, and young earth managing to keep one satellite, while heftier ones like Jupiter acquiring 67 etc. This is a topic still under discussion.

Nevertheless, the very first chapter had me wowed. I would never be able to look at our closest cosmic neighbor with the same eyes ever again. How often I have stood marveling at the moon? Out on walks, my heart always skips a beat when I catch sight of the beautiful, faithful satellite accompanying Earth as she tears through space. To think that there is a possibility that the very creation of our cosmic neighbor was crucial to our oceans is awe inspiring. I live on the Pacific Coast, and never can I see the bays, the ocean or the moon without reminding me of this book.

The Sea Around Us by Rachel Carson

The skies hold the answers to our most philosophical stirrings. Why do we exist?

The seas, it seems, holds the answers to our most existential stirrings. How do we exist? 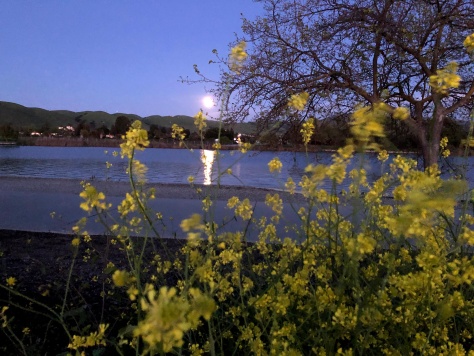 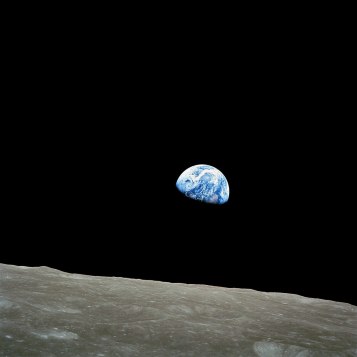 The night lamp was on, and I had a harried, desultory look on my face. It had been one of those days in which a lot had happened, but nothing had really happened. Days sent to try stout persons souls. The husband came and told me that I should probably try meditating for a bit, but I shook my head stubbornly. What if I fell asleep?

He looked at me amused. His eyes danced with the unspoken words: Who are you and where is my wife?

I laughed, and understood the look. A Lover Of Her Sleep if ever there was one. I  told him I wanted to read a little, since I have been falling behind in my reading, and he shook his head indulgently. I really do think you should sleep though – you look so tired!, he said, a line creasing his forehead as he looked at me. I swatted at the idea like a pesky fly, and surveyed the bedside table.

I don’t know how to use the word Tsundoku correctly in a sentence, but I had Tsundoku-ed the local championship leagues. Piles of books were stacked – children’s books, fiction books, non-fiction books, and all looking enticing and inviting.

Tsundoku is a beautiful word denoting the piles of unread books by one’s bedside.

Tsundoku (Japanese: 積ん読) is acquiring reading materials but letting them pile up in one’s home without reading them.[1][2][3]

The term originated in the Meiji era (1868–1912) as Japanese slang.[4] It combines elements of tsunde-oku (積んでおく, to pile things up ready for later and leave) and dokusho (読書, reading books). It is also used to refer to books ready for reading later when they are on a bookshelf. As currently written, the word combines the characters for “pile up” (積) and the character for “read” (読).[4]

I picked up a serious tome, and settled in. I had no idea I had been scowling till I started smiling a few minutes later. It was the musical patter of the rain. The beautiful rain was coming down in bucketfuls. I opened the curtains, and reveled in the beauty of the rain lashing down against the windows, soaking the tree tops, and flattening the flower beds. There is nothing prettier than the night skies sending torrents of rain.

I loved the word Pluviophile. Meaning a lover of the rain, it seemed to have a nice ring to it, a word meant to bring a smile to one’s face. 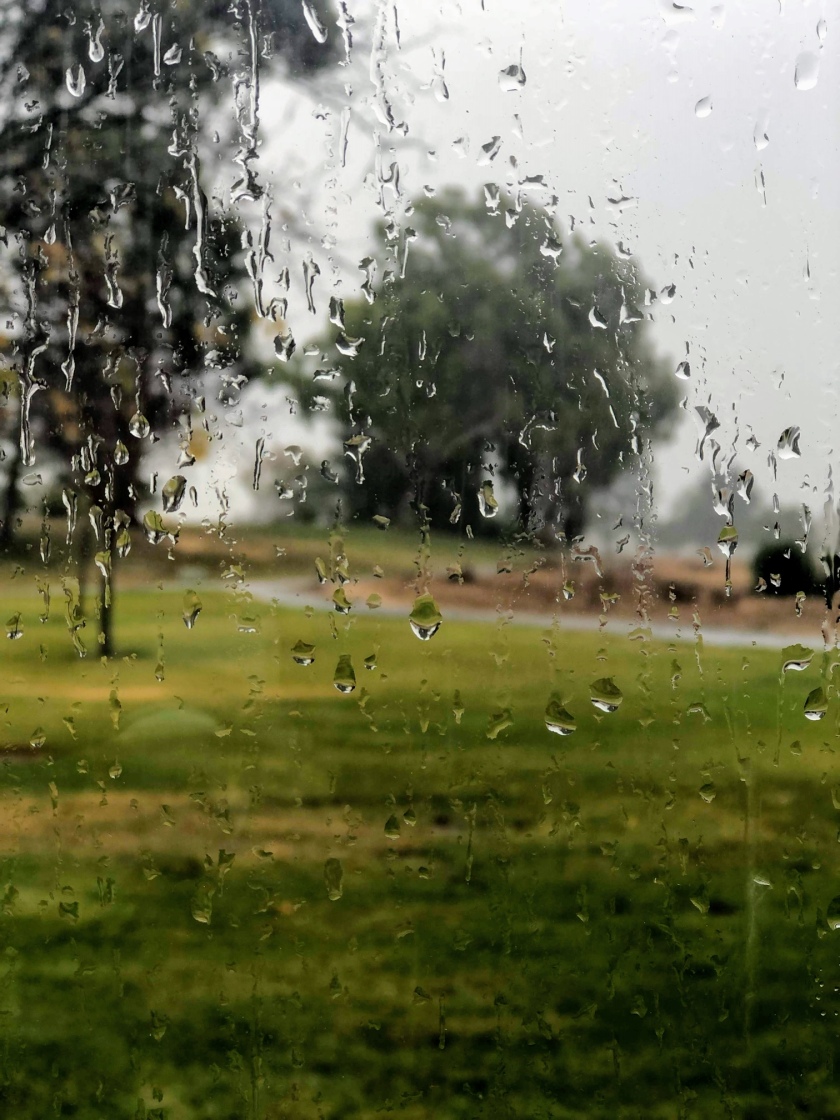 I opened the door, and watched the rain. I felt the cool breeze caress my face, and felt a surge of gratitude. I had said to my friends only a few days earlier that it will be lovely to have another bout of rain before the summer months set in and the neighboring hills turned brown. The Earth had already started emanating a slightly thirsty aura, and I yearned for the smell of rain against the hot Earth.

I have been looking for the word that captures that welcome scent, and found one recently.

Petrichor (/ˈpɛtrɪkɔːr/) is the earthy scent produced when rain falls on dry soil. The word is constructed from Greek petra (πέτρα), meaning “stone”, and īchōr (ἰχώρ), the fluid that flows in the veins of the gods in Greek mythology.

The Pluviophile in me smiled at the word and tucked it away for future use.

The weather forecast had predicted a Storm. In the US, it is never Rains but Storms. The rain I had watched was not a Storm. A Storm is when the rain huffs and puff and stomps its weight around. But this was no Storm. The street lights cast a lovely light on the clouds overhead and the raindrops pouring down. The world looked mellow and in that moment of watching the rain, a calm descended upon me.

After a few moments, I traipsed back to bed. I lovingly surveyed my Tsundoku pile again, and set my tome aside. It was time to read a Children’s book. Storm by Sam Usher beamed up at me, and I snuggled in with the lovely book. 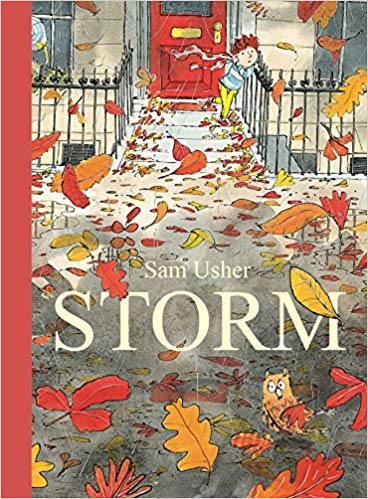 A beautiful book that captured the joy of playing outside after the rains and storms. I have never flown a kite successfully, and the book made me want to. The illustrations are mellow works of Art, and after admiring all the pictures in the book, I slept the sleep of the tired but happy.