I started this post out to write about all the books that have made life so enriching and beautiful in 2020. It has become a lovely annual ritual – a look-back on the kinds of things that interested and sustained me throughout the year.  But as I started writing, I felt a commentary was in order, as my reading changed with the events of the year. One felt like an eager student trying to cram everything relevant into one year, and then still feeling there is so much left to learn, so much to change, and so many things left to be done.

However, this overwhelm helps no one unless one reflects on the year past. So here goes. (The book list follows in another post.)

2020 is like one of those template books that somehow make it to the best seller lists. It started off as usual I suppose, maybe even showed a little promise, then the story takes you on a rollercoaster.  Deftly crashing you here, and bashing you there, the flow of events sometimes called for rolling one’s eyes.  Yet it took us to places one only imagined in thought experiments. There, inside a dystopian world, the story plunges on from one bizarre happening to another. True Schadenfreudian style if ever there was one.

Then having rattled your innards, somehow in the end, it manages to end on a hopeful note.

Were it a novel, we would write up a review that said ‘Unbelievable at times’.

🚀 It showed us Time Travel was possible. How? you ask.

🌏 You want an inconvenient truth? 2020 gave us several.

If only we had mastered biomimicry before mass production!

⚖️ In my close to two decades of life in the United States, never had we had to face a curfew owing to civil unrest, but 2020 saw plenty of these too. The Black Lives Matter movement reminded us yet again about how equity and justice are terms that not everyone can use with a level of trust.

🌌 It was also a year of cosmic splendor:

🏳️‍🌈 It was a political thriller (Will the elections happen? Will the votes be counted? Will the results hold? Will the winner be able to take up power?) 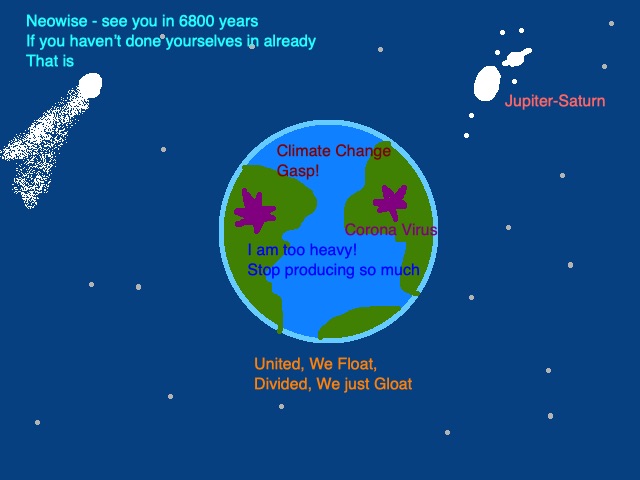 🥳 But it also has a hopeful end. Who would have thought that a virus that surfaced out of the blue (well bats really) killing thousands of people around the world, would have a vaccine found, and mass produced for consumption before the year was out? It feels like a Science Fiction movie in real-time. #CovidVaccine

A few years ago when the son was in kindergarten, I attended a class room show-and-tell in which their works of art were displayed. Endearing pictures of zebras, horses and assorted flora and fauna painstakingly done, were being showed off brilliantly by the children. When I drew up close to the son’s painting, I paused. There in the corner of his painting were several people with rainbow colored faces. I loved the idea, and asked him why they had rainbow colored faces, to which he said, “Our teacher said to put colored people in our drawings.”

I turned to his teacher, and she nodded smiling, “Yes, I did for diversity, but I didn’t expect this!” My heart warmed at his interpretation.

I loved it! How beautiful and void of prejudice we are as children.

“No one is born hating another person because of the color of his skin, or his background, or his religion. People must learn to hate, and if they can learn to hate, they can be taught to love, for love comes more naturally to the human heart than its opposite.”

I started reading Henry Thoreau’s book, Civil Disobedience, last week, and I must say the first chapter itself has me drawn in.  “The mass of men live lives of quiet desperation. What is called resignation is confirmed desperation.”

A few sentences later he says again, “It is never too late to give up our prejudices. No way of thinking or doing however ancient can be trusted without proof.”

Savoring the sentences and thinking of the rainbow colored faces in the son’s drawing made me think. What would it take for us to learn what it is to be human? It seems to me like to understand deeper, we need to rely on Science: Science as a Candle in the Dark. Any phenomenon not readily understood suffers from the same problems. Could there be a better way to gauge our human-ness?

Structurally, we are containers for cells, possess neurons for consciousness, and use language for communication between one another. But this puts us in no different a category than octopus, dogs, elephants, whales or dolphins. Most marvelous creatures on Earth have evolved from the same set of conditions the planet has been subjected to, and are hence remarkably similar in these aspects. In fact, we are limited in so many abilities than our far-more abled canine friends or bird friends when it comes to smell, colors and noise frequencies.

Here is a fun game to be played by all age groups:
The High Frequency Hearing Game

Quoted from The Soul of an Octopus by Sy Montgomery:

Chemically speaking, I suppose we can attribute Oxygen, Nitrogen, Carbon etc as major components of the human body. But this too, is not unique to us on Earth. Many lifeforms use the same structural elements for life.
Composition of the Human Body

Culturally, we have ideologies so different, yet so similar. Most religions have stories of a big flood (starting from the epic of Gilgamesh, to the Matsya avatar in Hinduism, to Noah’s Ark), our mythologies have similar creatures (how then could we have dragons in Chinese mythology and Norse mythology?) The fossils found in each region seem to have contributed to the myths (Sankhu / Chakra myths originate from nautilus fossils found in the Himalayas). Is myth-making then the only human identifying factor (I don’t think so, for whales songs have tonal informational bits having the same length of an Iliad or Odyssey – some whale songs have been known to be taught from generation to generation and last over an hour long).

The differences in skin colors too, are no more than an evolutionary necessity – the UV light in different areas of the earth, and ability of the skin to absorb Vitamin D in areas of high or low sunlight is primarily the factors that determine these.

The Biology of Skin Color (The link between human evolution over time; the ability to adapt to different levels of UV  radiation in the tropics vs the poles; and its correlation with absorption of Vitamin D is explained in this video)

I come back to the question of what does it mean to be human? What is our unifying factor? On this globally unified Earth, can we all just find a way to get rainbow colored skin?

How Kindness Became Our Pleasure – By Maria Popova on Brain Pickings

P.S: The son touchingly drew this drawing again when he saw me writing this post: 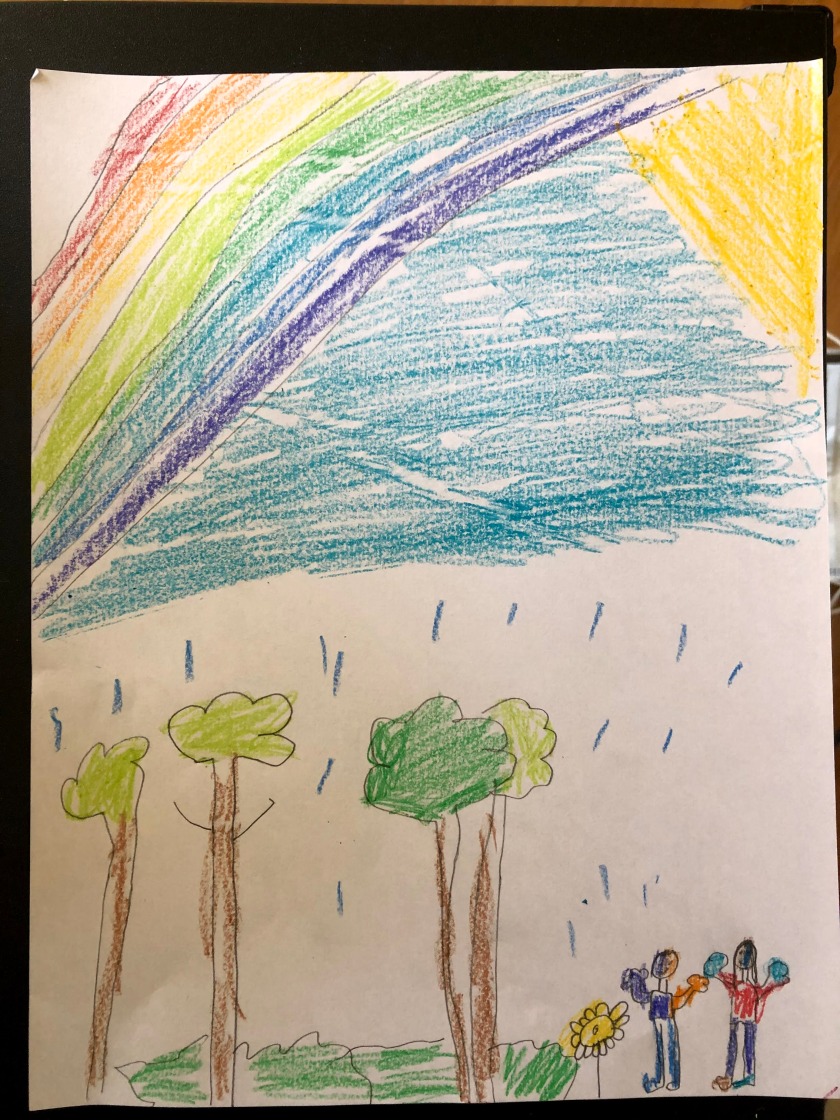