There is something special in being able to watch the Mars Perseverance Rover land on Mars during the day with your fellow explorer.

A work day was in bustling progress.  Many meetings, many projects, many interruptions, and many more deadlines were jostling about in the ether, when the son came charging into the room. It was the middle of his school day (one of the many high points of the corona lifestyle), “Amma! Amma! You will like this. I just came to tell you this! The Mars landing just happened!”

I plucked myself away from the myriad day-to-day happenings of my world, and looked up at his excited face. Luckily, it was one of those rare ½ hour slots that was meeting-free. “Do you want to see the landing? “ I asked, and he nodded. There is something special in being able to watch the Mars Perseverance Rover land on Mars during the day with your fellow explorer.

The video attests to Carl Sagan’s deductions in the book, Pale Blue Dot (essay: Sacred Black). The Martian atmosphere does look pinkish red with heavily desert hues. The son & I looked outside at the beautiful blue sky with reassuringly white clouds flitting by.

The Mars Perseverance Rover is tasked with looking for evidence for extraterrestrial life.

Mars has, it seems, been a most fertile planet for the imagination through the centuries. From harboring questions about life on its surface to envisioning warfare between worlds. As rich as lifeforms on Earth are, even in our imaginings, we are somewhat limited by how life has evolved on Earth. Cephalopods, trees, giraffes, humans – but what else is possible? What sensory powers are we not even considering?

The War of the Worlds (1898) by H. G. Wells. Features an attack on England by cephalopod-like Martians and their advanced technology to employ fighting machines to decimate the world.

Even as early as the 16th and 17th century, writers made bold attempts at imagining life on its surface. The canal like squiggles on its surface, led to intriguing theories on an advanced civilization running advanced colonies etc.

Now, seems like a good time for me to read The Martian Chronicles by Ray Bradbury. Given what we know about the Martian atmosphere now, there are places where the writing seems awkward. For instance, Ray Bradbury writes of a blue Martian sky – an example that it is hard for us to un-imagine what is. 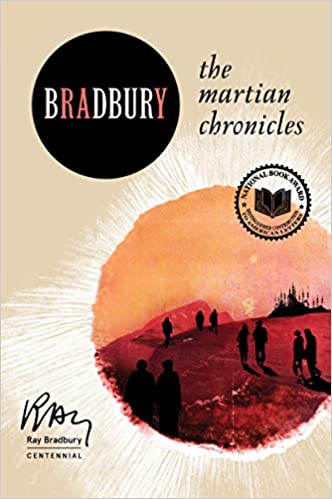 The Martian Chronicles (1950) by Ray Bradbury. Features human-like Martians with copper-colored skin, human emotions, and telepathic abilities. They have an advanced culture, but the human explorers are greeted with incomprehension.

Science took us to Mars with the reddish sky, but it was the blue sky with white clouds that enabled us to dream. The hunter gatherer is us out to explore the cosmic ocean, as Carl Sagan would say.

I started this post out to write about all the books that have made life so enriching and beautiful in 2020. It has become a lovely annual ritual – a look-back on the kinds of things that interested and sustained me throughout the year.  But as I started writing, I felt a commentary was in order, as my reading changed with the events of the year. One felt like an eager student trying to cram everything relevant into one year, and then still feeling there is so much left to learn, so much to change, and so many things left to be done.

However, this overwhelm helps no one unless one reflects on the year past. So here goes. (The book list follows in another post.)

2020 is like one of those template books that somehow make it to the best seller lists. It started off as usual I suppose, maybe even showed a little promise, then the story takes you on a rollercoaster.  Deftly crashing you here, and bashing you there, the flow of events sometimes called for rolling one’s eyes.  Yet it took us to places one only imagined in thought experiments. There, inside a dystopian world, the story plunges on from one bizarre happening to another. True Schadenfreudian style if ever there was one.

Then having rattled your innards, somehow in the end, it manages to end on a hopeful note.

Were it a novel, we would write up a review that said ‘Unbelievable at times’.

🚀 It showed us Time Travel was possible. How? you ask.

🌏 You want an inconvenient truth? 2020 gave us several.

If only we had mastered biomimicry before mass production!

⚖️ In my close to two decades of life in the United States, never had we had to face a curfew owing to civil unrest, but 2020 saw plenty of these too. The Black Lives Matter movement reminded us yet again about how equity and justice are terms that not everyone can use with a level of trust.

🌌 It was also a year of cosmic splendor:

🏳️‍🌈 It was a political thriller (Will the elections happen? Will the votes be counted? Will the results hold? Will the winner be able to take up power?)

🥳 But it also has a hopeful end. Who would have thought that a virus that surfaced out of the blue (well bats really) killing thousands of people around the world, would have a vaccine found, and mass produced for consumption before the year was out? It feels like a Science Fiction movie in real-time. #CovidVaccine

The children peered into the list of ideas I had for my blog while on the whirlwind trip to the other side of the world. Predictably, some of my better ideas drew a smirk from the teenager. When pried she rattled her laugh and said, “Maybe add an article or two on lame titles? Really! What is all this with the Ants and the Cosmic Universe? Who writes stuff like that?”

“I do!” I said. “I was pretty happy that morning when I got up early and went a-walking through the woods by the resort. There were jackfruit trees, pepper wines and uh, many other trees.”

I threw my mind back happily to that early morning saunter in the Western Ghats. How beautifully the little creatures had turned my haughty look skywards to ground wards and then back again? The saunter of humility it turned out to be.

The best part of the walk was the fauna that was up with the sun ready to greet a new day. There I was sleepy still, but happy that I had not wasted this glorious morning in bed. I had to do a double take when I saw dry leaves croaking and leaping about. Was I dreaming that I was up and walking while snuggling up cozily in bed? It has happened before. (When one wakes up and finds that that early morning jog by the lake never actually happened except in one’s dreams, it is disappointing.) It turns out these were clever frogs who had mastered the art of camouflage. They were the ones who attracted my attention ground-ward.

Till then, my spirits and outlook were sky bound – admiring the suns rays filtering through the tree tops, looking for butterflies, and the clouds flitting lazily. The clouds had opened up a few minutes earlier, drenched the hills, and then having done their job, decided to flit and laze for a while.

The teeming life on a tropical forest floor is endlessly entertaining. The temperatures were not too high yet, and many creatures had decided to get their spot of exercise, fresh air and Vitamin D before it became too much Vit D. The ants were bustling. Really, if ever we need motivation on a dull day, look no further than the role ants play in this cosmic universe.

They bustle, they plan, execute and deliver, they seem goal-oriented even when walking off with your bread crumb two hundred times their own weight from under your nose. Hundreds of them, in apparent harmony, with a shared vision of some kind, and an indomitable spirit.

This remarkable combination of spirited vision and lack of personal ambition is a balm to souls who mire themselves in the human world. Humans value competition as the means to make us better, but in the grand scale of the cosmic universe, wasn’t shared vision a loftier goal? I suppose Leaders try to cry themselves hoarse with speeches dripping with this sort of guff, but their own personal ambition thwarts the message somehow.

Everyone must spend a day every now and then in the forest re-aligning our spirits, and learning a thing or two from every single organism.

I said something like this to the children, only not as coherently and got another eye-roll as a response. I tried another angle.

Imagine these ants come out at night, and probably admire the stars. The beautiful canopy that changes. That was us isn’t it? Even as recently as a few hundred years ago, even while territorial battles were being fought, we admired the changing skies and built myths around it. “The myths you guys seem to enjoy so much!” I said.

“Remember, I came back from the walk and pulled all you children out for a walk through the woods? To see the beautiful forest in its glory?”

“Yes! We remember! There were no cosmic universes – just Appa giving his flora and fauna tour. He didn’t even know the names, just making up some stuff, and pointing to the dry leaves and saying – Imagine these as frogs.”

“Well, by the time you guys came, the frogs had gone back into their burrows or wherever? I don’t know – where do frogs live? ” Soon, we were discussing the abodes of frogs and I told them, “But you saw so many more butterflies!”

“So, Butterflies in a Cosmic Universe?”

“Or, moths in a cosmic universe more like. The butterflies go to bed. Where do you think butterflies live? Their cocoons must long be gone.”

I decided to let things rest. We are in a Cosmic Universe. We must live and let live and you know, share.