“I am not a typical teenager, okay? Everyone always stereotypes teenagers, and we are not like that!”

“And I am not a drama queen! “, said the teenaged daughter stamping her foot dramatically, though I could already begin to see glimpses of her impish smile twitching there on the corner of her lips.

“Of course you are not!” I said rolling my eyes, which she promptly caught. “So, when you remember what you are upset about, will you tell me?” I asked her.

Cheeky as she is, she had the good cheer to see the position, and she chuckled.

“I don’t suppose it is fair for teenagers to be judged this way, especially when they do nothing stereotypical like buying MOM jeans!” I said pushing relentlessly to clinch the deal.

The chuckle changed to full blown guffaws at this, and she rolled on the bed laughing.

“Appalling those jeans are! I never wear anything like that, and yet you had the cheek to go and pay more for them, and they are called MOM jeans for God’s sake. Not stereotypical at all, my dear!”

Timbered richly with the sound of her laughter, she agreed. “The jeans are pretty terrible! But I took a poll on Insta, and everyone agrees that it is a very good idea. Hippies do dress like that. With a tie-dye t-shirt and a flower headband, it’ll be lit!“

Lit, I am amused to hear, does not mean that she will be lit up in those little fairy lights. In today’s lingo, “Lit means like Awesome, you know Lit?”

We were discussing her proposed ensemble for Halloween. She wants to dress up as a hippie, and went out with her father and bought MOM jeans. In all fairness, she asked me for them, and I said, “MOM jeans?! Why not just wear my jeans with a belt?”

Ever the voice of reason, that’s me.

She rolled her eyes  (not in typical teenage fashion, since we are on the point of not stereotyping these saintly marvelous children)

Her creative side was in full blast. All she had read in her Greek myths, watched in her television shows: shows with raucous characters & sketchy parenting; combined to give her the idea for her Halloween costume. The idea was soundly seconded by her little Gryffindor brother, and her could-have-been-Gryffindor (if only he resisted the idea) father.

What blows my mind is how Marketing departments function. They took a bunch of overstocked baggy jeans that were languishing in the lots ever since the skinny jeans came into fashion, and gave it a name called MOM jeans and these children are willingly wearing them. I must learn some of that for my own sake. I have some long skirts that apparently are “Not Lit!”, that just may be made “Lit” again. Let’s see.

Should I dress as a teenager? Accessorize with sass, punch with pizzazz and cut being droll like a troll? That’ll be like totally lit!

When the daylight savings time change happens, regardless of how tiring the day and the commute has been, I will pep up in the evenings. Just listening to the twittering birds on the trees outside, the sight of young trees in bloom, and the new leaves are like a soothing balm to the soul.  The children who come out to play have all invariably shot up during the winter months and it is heartening to see them revel in the evenings on their bicycles or tricycles. The hues the setting sun throws against the sky never fails to lift my heart.

I stepped into the home one evening to find the evening chaos was worse than usual. Everywhere I looked, it seemed to me a bit of spring cleaning was in order. Piles of paper were on tables, coats and backpacks were strewn on sofas and floors, shoes with socks spilling out of them lay everywhere. My heart sank. I cradled my head in agony at the sight.

“There is so much junk in this house!” I said and started clearing up frenetically. The do-er is the worst, for it makes the non-doers squirm with guilt. The daughter squirmed, and the son looked discomfited.

“Oh you are cleaning up. Why, is anyone coming?”, quipped the teenaged daughter, and I moaned. I like to dispel this notion that we must clean up only when someone is visiting the old home, and I said so, loudly.

“Okay…okay…no need to get all learn-a-life-lesson-y, just asking.” The look she gave me suggested I was one screw short.

I donned my efficient look and got on with my cleaning spree keeping a running commentary up on the junk collection.

I picked up some plasticine (why do we spoil the environment with this trash?), a rubber ball (anyone plays with this still?), a torn glove(how did this beautiful glove tear and where is the other one?), a fruit bowl with what looked suspiciously like glue caked and dried(what is this? ), and a book of fairy tales that had come apart at its bindings. The pages were not held together by glue anymore, but they were still there inside the cover. (I had nothing to say but I smiled).

Heavens – how dearly I remembered the old book! The torn and tattered pages that I held gingerly in my hands seemed to take me back to those lovely spring evenings years ago when the daughter, then a toddler, would come to me clutching the large book in her hands asking to be read a story from it. The book was as large as her torso, and she tottered under the weight, but she loved the book. I knew she liked those stories so much. She listened intently, and sometimes, she would re-tell her grandfather the stories much to his delight. 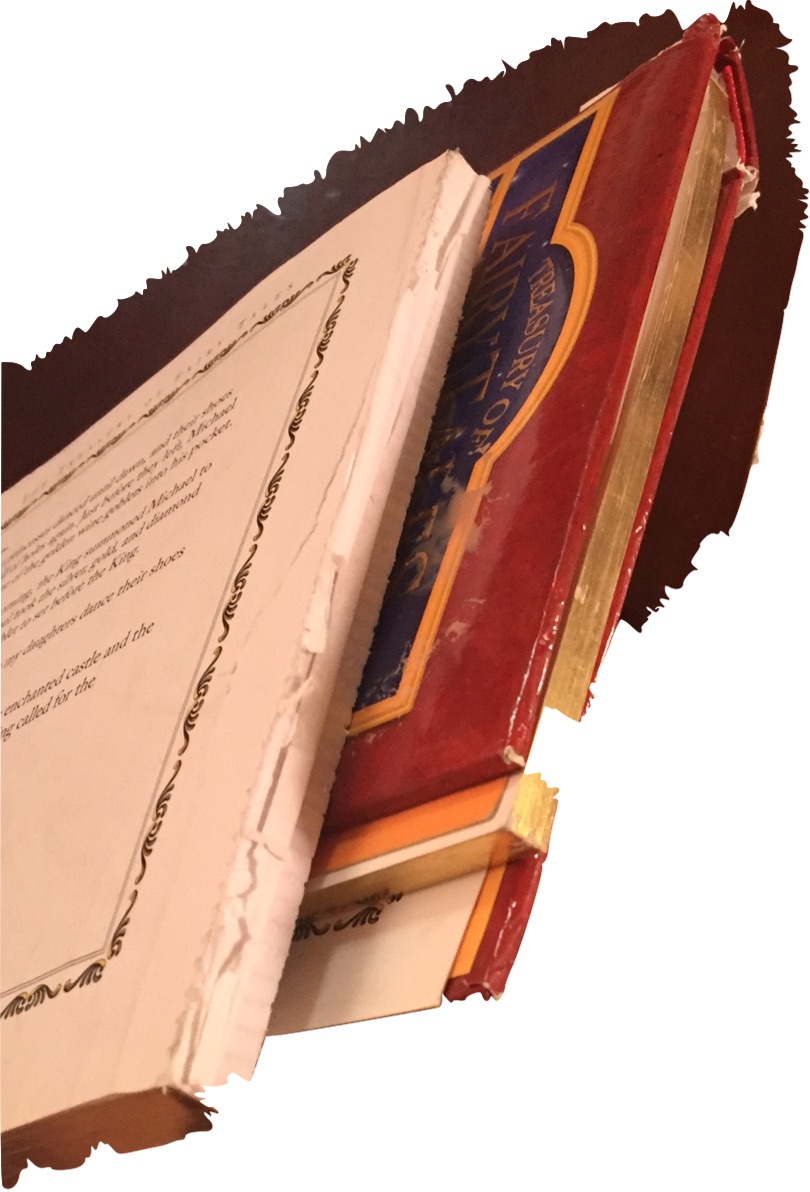 We had learnt morals, taken leaps of faith, and realized that external appearances do not matter all that much.

I looked at the torn book in my hands, and smiled again. Now more than ever, we must obsessively read our fairy tales and children’s books. Beautiful princesses can control their destiny, frogs can be princes, beasts can be gentlemen, elephants can hatch eggs and good always triumphs over evil.