Matt Sewell’s, book, Forgotten Beasts: Amazing creatures that once roamed the Earth is a highly captivating book of animals that once roamed the Earth. Beautifully illustrated, this book is a marvel. Every time, I marvel at how life managed to thrive, sustain, and regenerate in all its fantastic forms. As I thumbed through the pages, admiring the defense mechanisms of each animal, the unique ways in which they thrived and survived, an obvious question flickered through the brain : how many of our current organisms are having the same sort of trouble?

Starting with prehistoric animals, the book slowly walks through the animals through the ages, and finally arrives at the timeline in which human-beings appeared.

The next book was the obvious pair to Matt Sewell’s book of extinct animals. It is: 100 animals to see before they die – By Nick Garbutt & Mike Unwin.

Reading these two, along with Birds, Beasts & Relatives by Gerald Durrell, made for an interesting time in the old head. Gerald Durrell is a naturalist and his obvious enchantment with the fauna he finds around him, led to create the Durrell Foundation for Conservation of Animals.

So, it was a surprise indeed to be able to watch the excellent documentary, Back to the Brink at the Boston Science Museum.

We charged and weaved through traffic to make it to Back from the Brink. The documentary was playing in the Boston Science Museum for which the son & I were going. This was going to be our special afternoon, and we had made any number of snafus with the tickets, the cab to get there etc. But we were there at the right time, and the pair of us took a few deep breaths.

How often we find ourselves mired myopically into our own lives? It is at moments like these, that books, museums, and documentaries do their bit I suppose. We sat there, as the camera zoomed and picked us along for the ride. We were there to watch the exhilarating recovery of 3 animals who had made it off the endangered list.

As I sat there watching nature’s survival unfold before us on the high ceilinged dome, I remember thinking of Gerald Durrell’s book, Mockery Bird, and the sense of awe when I learned that Charles Darwin predicted a particular kind of species- a long proboscis, he said, should be there, given that there were flowers with a long tubular structure. A decade later, they did find the hawkmoth capable of pollinating the star orchids. How thrilling is must be, to be able to figure out things like that?

In Back from the Brink, the documentary walks us through 3 different scenarios in which man-made decisions led to the near extinction of certain species, and how man-made efforts also brought them back from the brink of extinction.

Each species has a different story arc – the foxes in Catalina Island were the result of DDT spray affecting the eggs laid by the bald eagles near the island. This led to a mass dying / migration of bald eagles. Once the bald eagles were no longer there, the golden eagles swooped in, and for them, these tiny foxes were prey. How the team of naturalists figured this piece out, and how they went about trapping foxes, bald eagles, and golden eagles, and then nurtured and relocated them till they could thrive again, is a marvelous journey.

The golden monkeys were a simple case of stopping poaching, but a hard fight indeed to get the poachers to act as guardians in these snowy terrains.

The red crabs had an army to fight and thrive against. The yellow crazy ants who accidentally came off the ships years ago, had ran amuck, and the crabs were being inched out of their own homes. This one, had a unique solution too. The naturalists introduced another species(knowing fully well out how much havoc such an act could cause). After much deliberation, they did so. The yellow ant population came down, and the crabs could thrive again.

The Boston Science Museum is a marvelous place for the curious and the uninterested alike.

It was a lovely morning before the rains set in. The hillsides definitely looked like they could do with some rain. The parched Earth still looked beautiful in the early rays of the sun. We saw a hawk at such close quarters eyeing a trip of rabbits down below that I felt a surge of its power course through the hills.

We were out on a hike and the son was ebullient. The morning air had lifted his spirits, and he was happily talking of this and that and taking us up steep hillsides.

On we went, through troughs and peaks, listening for the sounds of animals, birds and inhaling the fresh air. On top of one of the peaks, we stopped to catch a breath. I mock held my hips and said “Oh have a heart and give your old mother a break!” He guffawed and pointed out the next steep hill with gusto. I smiled, and held a finger to my lips – it was as we were standing there atop a hill overlooking a bay that we heard the murmur above. A susurration of starlings flying this way and that, forming and reforming beautiful circles in the sky.

A group of starlings are aptly called a Murmuration of Starlings. 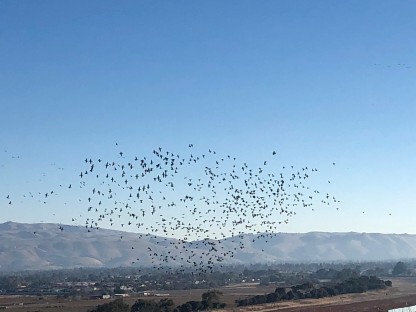 I don’t know how often we have stood close enough to hear a whole flock of birds wings flock together – if you haven’t, it is truly magical.

A few days later, we were heading to Monterey Bay Aquarium? After tucking into their mac-n-cheese, which is apparently the best, we meandered our way through the place. Marine biology, research, conversation of species and all the noble things follow a splendid Mac N Cheese. The clouds were out gamboling in the blue skies. They had reason to. They had been grey and full of themselves for the past few days, They had made terrible whooshing noises as the rains thundered through the Bay Area. Having taken their load off though, they looked lovely in the skies.

“Hey amma! Do you see that one? Just the top of it looks like a dog!”
“Whoops! Now it is changing shapes to become a shark!”

Watching a billow of clouds is always a magical experience. 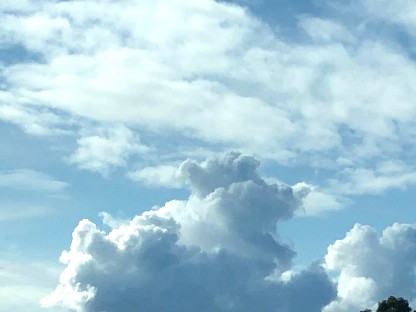 Later that day in Monterey Bay Aquarium, Nature showed us beautiful species of fish that could collectively shoal and swarm forming beautiful shapes as they swam in large numbers together.

Clip from Wiki:
During the sardine run, as many as 18,000 dolphins, behaving like sheepdogs, herd the sardines into bait balls, or corral them in shallow water. Once rounded up, the dolphins and other predators take turns ploughing through the bait balls, gorging on the fish as they sweep through. Seabirds also attack them from above, flocks of gannets, cormorants, terns and gulls.

A bloom of jellyfish is enough to fill one’s heart with joy for hours – floating seemingly aimlessly, their pulsing, electrifying bursts are nothing but therapeutic.

A Charm of Goldfinches by Matt Sewell is a marvelous book outlining why we have the collective nouns that we do. Why do a Trip of Rabbits thrill us? Why are Charms of Goldfinches so charming?

With beautiful illustrations, it is a charming book indeed. 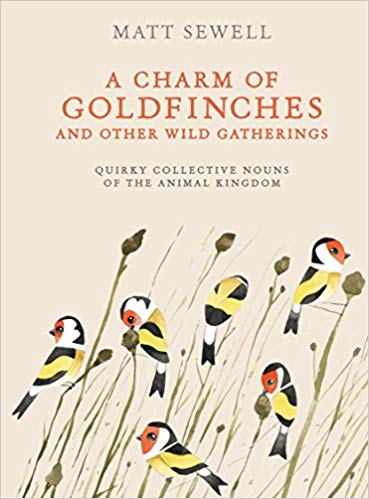 I remembered a game we played on a car trip some time ago. It had to do with the one big super power we could wish for. While there were things like Lightning Blasters, I think the one that took everyone’s fancy that day was Shape Shifters.

We are so corporeal in our bodies that we rarely of even think of things we can shift into. But this kind of species shifting shapes at will collectively and in a coordinated manner is not just fascinating, it is mesmerizing.

Watching clans of humans though, not so much!