I gazed out of the window feasting my eyes on The Lord of the Trees working hard so early in the morning. The trees went past their blooming-flowers phase to the sprouting-young-leaves phase in the past few weeks.

“How can anyone who has spent any time observing life like this, feel like not preserving it?” I asked. Us not looking after Earth well enough for future generations is a pet peeve that regular readers of this blog know.

“Because I don’t think people stand and gaze at squirrels like you do when one is already late for school in the morning”, came the crisp reply and I nodded sadly hastening to bustle about for the morning tasks.

The squirrels have resumed lording about the trees like they own them, which I suppose they do, since they are in them so much. I see them lovingly scraping bark, and checking out the fruits . I fight a losing battle every year trying to save the fruits from them. Friends have suggested fruit nets, but I haven’t the heart. They are the ones that live there, and sometimes I like to think of them sunning themselves on the branches while I am in a drab looking conference room surrounded by tonnes of concrete to pay for the land that these trees rest on. I only wish they would eat the whole fruit before tossing them to the ground, or hiding them away somewhere for the Winter months. 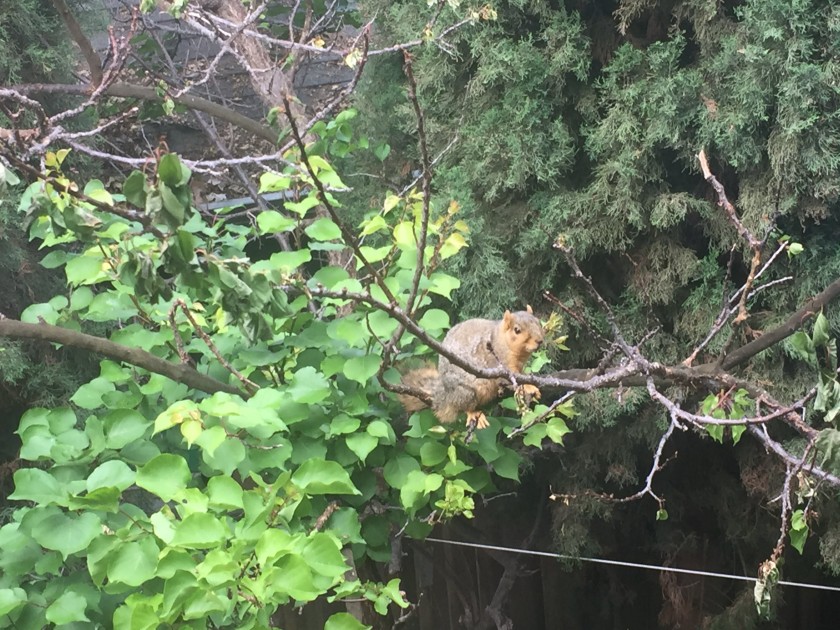 I cannot deny that it is nice to see the little creatures busy again. The winter months are a little slow for them: though they do not hibernate much (apparently, they do not have enough body fat to sustain them through long cycles of hibernation), they sleep a lot. I wonder how their burrows are, and whether they feel the difference between night and day when they emerge from their deep burrows into the spring time bursting with flowers, fresh leaves and the promise of fruit.

A few days later, the son and I picked out a book in the library called Morris Mole by Dan Yaccarino that dealt with a similar subject. The book was about a mole who was a wee bit different from his brothers and sisters.

One day when the moles ran out of food in the deep deep burrows, the eldest moles wanted to dig deeper down, but Morris had an idea that nobody listened to. So, he “dug deep down in himself and found courage”, to dig upwards.

When he emerged into the spring time, he is enamoured and baffled by the big wide world up there.

This world also offers him the rare gift of friendship with creatures unlike himself such as a fox.

The book made me think of how some seemingly little occurrences and thoughts have the power of transformation in them. Would Morris Mole have discovered this wondrous world overhead if he had not paid heed to that little crazy idea and acted upon it?

A few days later, I stopped to observe a squirrel again. This time, it was sitting by the roadside, and sniffing a mustard yellow flowery plant with a contented look on its face. The photographers up at the National Geographic magazine would have been able to get a picture of just such a thing. As it turned out, by the time I fumbled in my pockets, and took out the phone, dropping the keys in the process and finding some tissue marring the phone screen, the squirrel scampered probably laughing to its burrow. But I have the image in my mental eye: I hope it will remind me to enjoy the present when plans shadow life, or life overwhelms reflection.

All good things are wild and free – Henry David Thoreau

I wish we could all dig deep down inside us to find the determination to set aside some time to spend with living, growing things that are very different from ourselves – observe a bird sing, marvel at a squirrel on a tree, look at ants carrying food, watch a spider spinning a web, or feel the wind against our faces knowing that it just rustled that beautiful tree top nearby. Maybe that will open up a way of living that is much more rewarding and satisfying like the world Morris Mole found overground.