When R K Narayan said, writing is like a yoga, I suppose he didn’t quite envision the exact pose in which inspiration would strike. For me, it seems to be in the Shavasana(sleeping or corpse) pose. Take Saturday night for instance. I had mooned about the hills early in the am. Happy  cows, and cheeky turkeys hobnobbed with nervous cows and pesky humans to great delight in the misty dews of the morning.

A morning out in nature is usually balm enough to get the old inspiration going. I spent the whole day with wisps of little sentences floating in and out of the brain. Sentences that would make amazing epiphanies, little witticisms that I yearn for when trying bite-size nuggets of wisdom, they all paid a visit.

Throughout the day, inspiration seemed to come along just when I was slicing the onions, or grumbling about the crumbs with the old vacuum cleaner in hand. I had no access to put some of these words to paper. Then, early evening came, and I sat down to write, when the beautiful full moon rose – hanging like a large golden orb over the Earth. Poets swooned, artists swelled, and writers bloomed. I rushed in, opened my laptop, and had one of the dullest writing sessions possible.

I teased and pleaded – trying to gather the wisps into a cotton ball of candy, but nothing happened. I wrote the dullest set of sentences conceivable and decided to not fight the muse anymore, and headed to bed.

“As a writer I have always rather kept off snails, feeling that they lacked sustained dramatic interest,. With a snail, nothing much ever happens, and of course, there is no sex angle. An informant I can rely says they are ‘sexless or at least ambivalent… Obviously, the snail-meets-snail, snail-loses-snail, snail-gets-snail formula will not help you and this discourages writers from the start.”

Well, what do you think this innocuous paragraph did? It started the brain off on a most interesting snail trail. I harked back to the book, Birds, Beasts & Relatives, by Gerald Durrell, where he dedicates a good portion of his musings on myrtle forests to snails, and what an interesting love subject it proved to be.

He writes with such obvious rapture on the mating ritual of snails, that I wonder why entire sonnets aren’t dedicated to this marvelous endeavor. He had the good fortune of finding the slow blisters stirred into action after a freak thunderstorm got them going.

Sure enough, on a myrtle branch there were two fat, honey- and amber-coloured snails gliding smoothly towards each other, their horns waving provocatively.

… This freak storm had obviously awakened them and made them feel gay and romantic.

So, there they were, side by side attached to each other by the two little white cords. And there they sat like two curious sailing ships roped together. This was amazing enough, but stranger things were to follow. The cords gradually appeared to get shorter and shorter and drew the two snails together. They stayed rapturously side by side for some fifteen minutes and then, without so much as a nod or a thank you, they glided away in opposite directions, neither one displaying any signs of darts or ropes, or indeed any sign of enthusiasm at having culminated their love affair successfully.”

I closed the book, and an image from the early evening, with the skies pink in the setting sun arose. I had just watered the plants. The children and I had squealed at the moisture at the end of the hot day, and stood there enjoying the little rainbows created by the water sprays, when I spotted a snail clinging to the succulents, and making a slow but hard climb towards the lavender patch. The children gathered around to see the beautiful creature too. Was the snail’s sentience relishing the sunset skies too?

Sluggish thoughts indeed, but rather the best for a drift into sleep. Where old P.G.Wodehouse was stumped with the snail-as-dramatic-love-interest angle, old Gerald Durrell had spun a yarn with the very angle. I yawned one of those jaw-breaking ones, and resolved to write about snails instead. So, here we are.

The son tumbled out of his room with yet another joke. His teachers apparently tell them a joke every now and then, and he repeats them to me if he finds them really funny, or remembers to. One of the many gifts of the Covid lifestyle are little snippets like this.

I stood there waiting and wondering what today’s j would be about.

“Why did the skeleton not go to the party?”

“I don’t know – because it had too many bones to pick?”

“Umm…don’t know. Why didn’t the skeleton go to the party?” I said a little impatience in the tone. I had to get to that next meeting.

I moaned and laughed at the same time. A lovely feeling of warmth spread through the being as I headed off.

Later that day, I sat musing about humor and how marvelous a gift it is to humankind.

My Family and Other Animals is a marvelous book by Gerald Durrell. This book has the distinction of being the first book that I read belonging to the Humor genre. I remember it as though it was yesterday. Sitting in class 8-B, the sun was shining outside, there was a butterfly in the lawns outside, but our English teacher seemed to prefer the miracle of the written word to the fluttering butterflies outside. She put on her glasses and whipped the book out of her handbag in one elegant motion and said we were going to read the book.

My Family And Other Animals: See how the author makes you laugh when you read the title itself? she said. We must have looked like Canadian geese being tickled for the first time, for she proceeded to explain the humor in the title. I don’t know whether you have tried tickling a Canadian Goose. I haven’t, but I think they would react the same way. Stern looking creatures Canadian Geese.

Anyway, I hope for my teacher’s sake that we loosened up as the reading progressed. But, now that I look back, it was one of the first books that made me look for humor in daily situations. Mark Twain – especially the little story of Tom Sawyer painting the wicket gate was another. Swami and Friends by R K Narayan was equally memorable. I remember reading somewhere that R K Narayan when asked about his inspiration for Malgudi – that eternally inviting town that beckons you every now and then, said, he just watched life pass him by and that was all there was to Malgudi.

Pickwick Papers was slow going initially, but the humor in the book was unmistakable. These are the times I am thankful for growing up in a pre-Internet, pre-on-demand television era. I might not have stuck with Pickwick Papers otherwise.

The ultimate guide was of course P G Wodehouse. When in high school, I changed upon P G Wodehouse, I did not immediately appreciate it. It took a few readings, but oh! What a gift?! What a gift!

The father, of course, was and remains a constant reminder to find joy in every day life. His jokes were not always appreciated by the mater, but he could take a the rough with the smooth. Life was funny, curious, interesting and not always serious if only we stopped to admire the humor in them. The husband, the daughter and the son all joined the bandwagon too. My Family and Other Animals was taking shape in the Nourish-N-Cherish household.

Where am I going with all of this?! Oh yes! The blog itself. Nourish & Cherish started as an act of whimsy 16 years ago. It is a place that I regularly choose to don the sunny side up mentality in life.  As I started to write down this little skeleton joke, I mused on the thousands of little jokes that did not make it to the blog. For of course, I am guilty of thinking about writing and reading about writing far more than writing itself. But I am glad for the ones that did make it.

In over 900 posts over the past 16 years, life has taught me time and again, that you can choose the sunny side up.

To infinity and beyond!

California is bursting with beauty in Spring. Sometimes, the beauty is unimaginable in the literal sense of the world. When I close my eyes at night,  I see upon my mind’s eye the flowers rushing to bloom, and the leaves sprouting etc, but reality is much better. Hope is stirring, and I feel a great need to join nature’s party.

The pandemic lifestyle has chipped into my reading time somewhat, so I felt a treat was in order. Uncle Fred in the Springtime, by P. G. Wodehouse was that treat. I spent time with the decision. Like an excited toddler told that they can choose either the candy or the ice cream. Should I visit Bertie Wooster & Jeeves, or the beautiful gardens of Blandings Castle?

As I sat squashed between a rosemary bush on the left, a lavender patch behind me and purple verbena flowers (I think) on the right, I felt like Lord Ickenham (Uncle Fred) myself. A great sense of peace and a sanguine sense all-will-be-well stole over me. 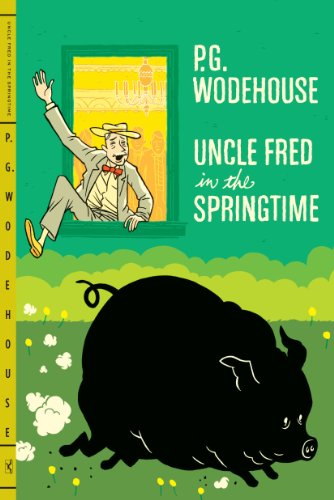 Not for the first time did I thank the universe for sunny minds like P.G.Wodehouse. I suppose there are quite a few like him in this world- thank goodness he chose to share his bounty with us.

A telling piece had me analyzing life from various angles and my restive spirit bounded off on its own. A helpful bee buzzed me back to the gardens of Shropshire where Lord Emsworth waited patiently with his large pig, The Empress of Blandings.

“Anyone ignorant of the difference between a pessimist and an optimist would have been able to pick up a useful pointer of two by scanning the faces of this nephew and this uncle. The passage of time had done nothing to relieve Pongo’s apprehensions regarding the… As always when fate had linked his movements with those of the head of the family, he was feeling like a man floating over Niagara Falls in a barrel.

Lord Ickenham, on the other hand, was all that was jovial and debonair. Tilting his hand at a jaunty angle, he gazed about him with approval at the decorous station which has for so many years echoed to the tread of county families.”

I felt for Pongo Twistelton. To hobnob with one with such an optimistic outlook as Lord Ickenham isn’t all roses and lavender, as I knew only too well.  The husband suffers from incorrigible optimism, and it is most trying. When you’d like to blow a few whistles like a cooker with too much pressure built up, it doesn’t help to see your partner-in-exactly-the-same-situation bleating happily and behaving like all these pressures are life’s little gifts meant to tease and ease our life.

The t-shirt his children chose for him has the phrase: ‘There is 50% water, 50% air, Technically, the glass is completely full!’

And he deserves every syllable of it.

The Disney Pixar movie, Soul, hits the mysteries of personalities bang on the head.

Who enters the optimistic tent and which ones were lured into the pessimistic tents? Could we find a way to get us some optimism? The surest way I’ve found is via a peek into the ‘sunlit perfection’ of the worlds created by sunny minds such as P G Wodehouse.

For those moping about life, please head outdoors and take a sprig of spring. All others, please do the same.