I don’t like to go on about First World problems when the world is grappling with the stifling effects of the Covid-19 lockdown, but as a chronicler of the Nourish-N-Cherish household, my job is a tough one. There is much to write – my list of unwritten posts grows by the day.

In the latest news, I had to shoo out protestors before my meeting started. The protestors were noisy, marched with placards and while their motion held merit, I could not allow protests of this nature to carry on into my meeting slot, plus they did not have the critical mass of individuals required to ban the protest altogether.

The morning had started with the son asking “Is it only Tuesday?” and we laughed.

“Yes it is only Tuesday my child – only the second day since school closed! I hear you!” I said. The daughter was singing the Disney song “When will my life begin?!” and looking forlorn before her day started. Covid-19 has us all in Shelter-in-place mode, and that has thrown all of us in a loop.

While we are grateful for the ability to be able to work from home during these times, it also makes for an interesting dynamic in the home. Do we wear gloves and arm wrestle for the office space? The daughter has online classes and is therefore quite happy to be holed up in her own room.

In what is a low move, the Television in the house has decided to go into social distancing and is sheltering-in-place. When asked to glow and sing, and generally make merry, the television has decided to go mute and shut down with a satisfying click.

The daughter, when she heard of it, moaned and said
“What?! Oh my goodness! Do you really think we can spend all that time together without TV and not drive each other nuts?” I laughed and said that I was touched she thought that way of her kind family. She rolled her eyes. “You know what I mean!”

The son rallied as best as he could and said it would be lovely since he has never spent a summer with parents with all of us at home through the day. I was touched, and also glad to see the silver lining. He, too, did not take the TV blow stoically, however.

That is how I found the pair of them crouching and writing up protest slogans on a piece of cardboard, which in happier times would have been used for making traps for St Patricks Day. patricks_day_ij-v1

They came marching noisily protesting for the TV and I found myself laughing.

I was reminded of the New York Times article that a friend shared with me a while ago, “Let Children Be Bored”. One thought in that article particularly spoke to my heart, As children, we rarely complained of boredom, because we knew where that would get us. It would get us the task of cleaning our room, or cleaning up our clothes cupboard, or worse yet, the haunted, “Why don’t you study?” refrain. It was vastly better to draw five hundred versions of a snowflake than to concede your boredom to an adult.

Thich Nhat Hanh said, We have more possibilities available in each moment than we realize.

Life is boring and the sooner we learn to keep ourselves occupied, the better for us. We learnt that lesson quickly did we not? So, why do we feel the obligation to whip out a form of entertainment for the children or feel the need to engage them in anyway? By doing so, are we not starving the creative self in some way? The eternal self , as Mary Oliver calls our creative self, needs solitude, it needs boredom to whip up an imaginary world, a novel game or a piece of Art.

Three days of no television, shelter-in-place mandates, no school, and continuing work will quickly have me begging for the Television, but for now, I have a list of chores ready.

“Come children – let’s start dinner! While you put away the dishwasher, why don’t you help me with the vegetables?” I said in my best head-chef voice humming loudly – “When will my life begin!?”

I heard the daughter say, “Is it only Tuesday?!”

As I set out the kanu leaves in the backyard on a bitingly cold morning , the rain drops from the trees above dripped onto my back. When one refers to shivers down the spine, I suppose that is a literal enough description. I charged back into the warmth of the kitchen multiple times as I drew out the squiggly lines with rice flour – quick kolams to appease whom or what I did not know. I am not one for following rituals every much, but some how I like this one.

Rains are lashing the Earth, and I am grateful. Last week, we celebrated the Indian version of Thanksgiving, Makara Sankranthi – the beautiful festival thanking Mother Earth for providing us with plentiful food, a nourishing environment, and so much more.

Kanu is typically celebrated by having the daughters in the family set the morning kanu for two reasons: (1) our forbears supposedly come and eat the offerings as crows, (2) the girls pray for the well-being of their brothers, who then give them gifts for their prayers and wishes.

In our feminist household of course, we have long since modified the ritual. It isn’t just the women who set out the kanu for the brothers – we all set the kanu and pray for our siblings’ well-being. We celebrate not just gratitude to Mother Earth for feeding our rather populous brood of humanity with her harvests, but also for the gift of sibling love in this large world.

Coincidentally, I picked up the book, For Small Creatures Such as We, By Sasha Sagan. (The daughter of Carl Sagan and Ann Druyan). After all, her father’s Cosmos book and her parents’ TV show, Cosmos, still has me ringing with the Joy of Existence every time I dip my feet into the “shores of the cosmic ocean“.

Sasha Sagan’s book does not disappoint. She says, and I quote:
“Beneath the specifics of all our beliefs, sacred texts, origin stories, and dogmas, we humans have been celebrating the same two things since the dawn of time: astronomy and biology.”

I sat there savoring that sentence for its simple truth, and elegant choice of words. Festivals and rituals are our ways of making sense of ourselves with respect to the larger cosmos – and her book marvelously outlined rituals and festivals in various parts of the world in different cultures and religions.

Discerning the sentiments behind the rituals is a particularly savory task, partly because I have a healthy skepticism about the Gods, and oscillate between being a secular agnostic and a believer. For those who are Secular in outlook, Sasha Sagan’s book is a marvelous read. It encourages us to come up with our own models for celebrating life in this cosmos.

That cold morning as I set out the kanu, I wondered, not for the first time, why we set out cooked rice pongal for the crows. Is it to acknowledge our evolution as mankind to be where we are? Using fire to cook, was probably the single biggest leap in our journey, followed by becoming agriculturists from the hunter/gatherer mode. How different would everything have been if these two had not happened?

I especially thought of the brilliant poem she had referenced in the book by Vietnamese Zen Master, Thích Nhất Hạnh :
In this plate of food,
I see clearly
the presence of the entire universe
supporting my existence.

I also read a poem by Mary Oliver on Rice in the book. Blue Iris, and together with the books For Small Creatures Such as We, and Cosmos, it makes for a marvelous way to start the decade.

Rice – A Poem by Mary Oliver

It grew in the black mud.
It grew under the tiger’s orange paws.
Its stems thicker than candles, and as straight.
Its leaves like the feathers of egrets, but green.
The grains cresting, wanting to burst.
Oh, blood of the tiger.

As more and more of us move towards urban hubs for living, the less we realize all that happens to make food available for us to consume. How many of us have seen rice plants, or coffee plants or pepper vines – actually even if we have, how many of us consciously think of the journey from farm to table in its cooked form? 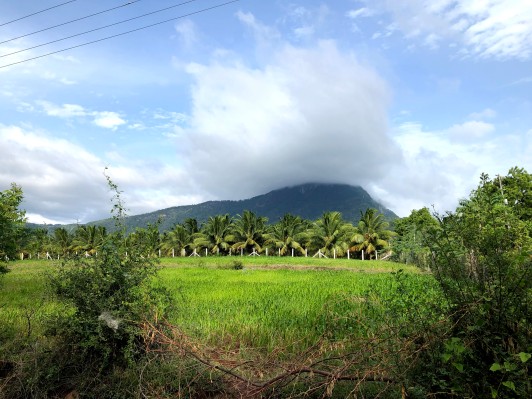 It is truly an enterprise of staggering proportions to realize how much has to happen for smooth functioning of Society, and it is lovely to read a book that is so full of joie-de-vivre

I like the concept of  thanking Mother Earth for her bountiful gifts to life (Did I mention this already?). When it starts off with fierce winds ripping branches from your backyard trees, followed by glimpses of sunlight illuminating the clouds during the sunrise, followed by mild rain, and then seeing a glorious double rainbow; what is not there to feel thankful about? 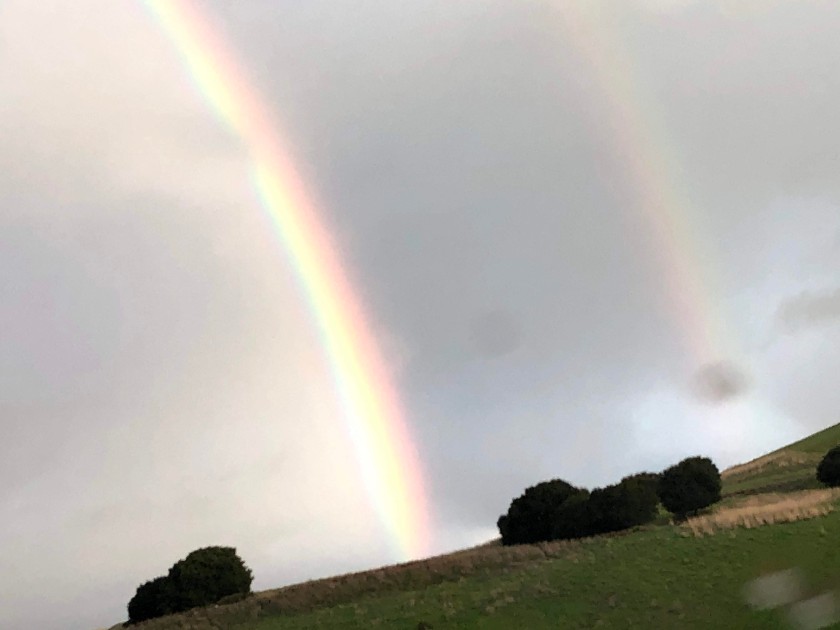